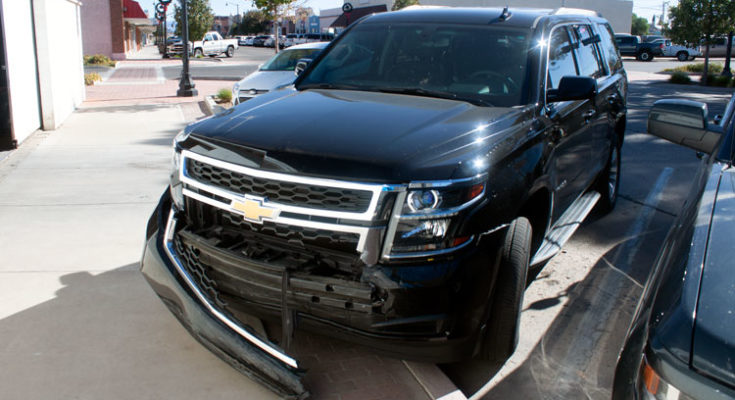 SAFFORD – An allegedly intoxicated man crashed into four parked vehicles at the eastern end of Kempton Chevrolet’s used car lot early Thursday morning and then proceeded to flee the scene.

The driver, identified as Ismael Matalgah, 32, was eastbound on U.S. Highway 70 when he went to the right of the roadway. The vehicle traveled over the curb and onto the sidewalk and then into the vehicles parked on the lot. Matalgah then proceeded to back up and drive away from the scene.

An employee of Kempton’s witnessed the collision and informed the Safford Police, which then tracked down Matalgah at the Economy Inn after a Graham County Sheriff’s deputy spotted his car.

Matalgah allegedly advised he had just gotten off work from the mine in Morenci and that he drank a couple of shots of Jack Daniels whiskey prior to driving back to the Safford area. He said he then went to Burger King for some food and on his way back to the motel he fell asleep and drifted off the road, striking the vehicles. He allegedly admitted to being drunk and told the officer to just take him to jail.

The officer did place Matalgah under arrest for aggravated DUI, but released him after receiving a blood draw for testing purposes.

Matalgah previously was arrested for theft of means of transportation, possession of marijuana, possession of drug paraphernalia, reckless driving, and speeding in excess of 85 mph. He took a plea agreement and pleaded guilty to theft of means of transportation, possession of drug paraphernalia, and reckless driving in exchange to drop the other charges and was placed on probation. At the time of the Kempton collision, he does not have a valid driver’s license and he is currently still on probation.

Kempton Chevrolet co-owner Kip Kempton thanked the police department for their quick action in apprehending Matalgah and said he was just glad nobody got hurt.

“Thank goodness nobody was walking on the sidewalk,” Kempton said. “He could have killed somebody.”

The vehicles that were struck, a white Ford 350 Super Duty pickup truck, a black Chevy Tahoe SUV, a white Toyota Tacoma TRD Sport pickup truck, and a Lexus SUV, were damaged to an excess of $10,000. The Chevy itself had extensive front-end damage estimated at $5,500, and the Ford was expected to have frame damage as its tow assembly was bent. The perk of having a body shop at the dealership allows Kempton to fix the vehicles after receiving insurance quotes and place them back for sale.

This article was updated Tuesday, Nov. 20.