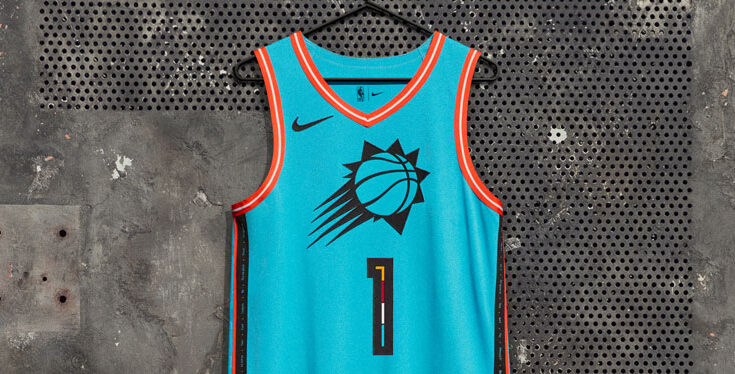 PHOENIX – A picture of Camelback mountain would have been the easy route to take. Or maybe the glow of a panoramic sunset lighting up the West Valley. Arizona has no shortage of beautiful sights from which to choose, but this task for the Phoenix Suns was meant to go much deeper.

That’s the power of sports. They create moving stories and images that prompt changes in the community, expose a light on a societal problem, or allow people to understand a message through the eyes of someone else.

But can all of that be captured on a jersey?

Nike’s City Edition uniforms, a campaign where all 30 NBA teams created a new jersey design for the current season, challenged teams to find a unique idea that highlights its community or culture through basketball.

The Suns unveiled their City Edition uniforms in an announcement last week as well as the message behind them. Through the colors and designs on the jersey, the Suns honored all 22 of Arizona’s Native American tribes located in Arizona, something that has been in the works for the last two years.

“We had a big focus on making sure everything we put into the uniform had a purpose and a story behind it that actually elevated the story of the Native communities,” said Graham Wincott, Phoenix Suns senior marketing director. “It helped tell their story rather than us interpreting their story.”

Basketball lives and breathes in Native American communities. Reservation basketball is a big social event, as passionate crowds fill gymnasiums from Navajo land to the Tonto Apache and every reservation corner in between.

Shawn Martinez understands basketball’s impact on Native American reservations more than most. The Suns’ senior director of live presentation was born and raised on the Navajo reservation, where his love for the game took root and grew. He played rez ball as a child and later for Window Rock High School in Fort Defiance.

So it was only natural that Martinez was the driving force behind the Suns’ creation.

“Growing up on the reservation, basketball is everything,” said Martinez, who at times practiced with a shoebox as a basket and a sock as a ball. “Having that community support through rez ball and basketball was just amazing growing up and just helped fulfill some of the dreams I had of making the NBA in some form of fashion.”

When a position like the one he had in Detroit opened up in his home state with the Suns, Martinez applied. He had already applied twice for the job, and on the third try, he received an offer and became a full-time member of the project.

“We really want to use our platform as an NBA team to educate our fanbase and NBA fans around the country about the program, what it means, the 22 tribes of Arizona and their history,” Wincott said.

Martinez pulled people from Native American reservations to work on the program. This included tribal leaders and key members in the community who could collaborate and help the Suns make the jerseys impactful while steering clear of cultural appropriation.

Specific details in the jersey give life to the indigenous people’s story. The color of the jersey is turquoise, to represent the protection stone that holds extra value in the Native American communities. Turquoise as the jersey’s main color is symbolic of the players having an extra layer of protection on the court.

There are two similar patterns down the side of the jersey and on the beltline, each exemplifying traditional stairstep patterns to some Southwestern tribes.

Another design on the jersey includes the Suns’ logo surrounded by 22 feathers. This represents Arizona’s 22 tribes and matches the Native American medicine wheel, which represents the four cardinal directions and four cycles of life. This will also be the design of the center court. Each Suns player received a medallion with this logo. Martinez wears one around his neck wherever he goes as his armor for when he directs the team’s live presentations.

“I wanted a tribal member from one of the tribes here in the state to do the beadwork,” Martinez said. “There’s no two alike, there’s only one. Each player got their own and they gotta represent.”

The most important part of the jersey, according to the designers, is located on the side panel. It contains the 22 translations from each tribe for the word “sun,” something that would not have been possible without the complete help from the Native American tribes.

“Many of these languages were never written languages,” Wincott said. “It represents the resiliency of these tribes who have passed these languages down from generation to generation. Having the ability to put these words in a written form on our jerseys is an honor in itself.”

The program also includes education during games. The Suns will wear these jerseys for 10 home games throughout the rest of the season. During each game, the Suns will honor a Native American hero in basketball to further educate fans about the sport’s deep ties to the reservations. There also will be a traditional dance or song performance at halftime.

On Wednesday night, the program’s debut included the singing of the National Anthem in Dehe, the native language of Martinez. There was also a song blessing from members of the Gila River Indian community. During halftime, the 22 tribal members were honored and thanked for their impact on Arizona and their help with the program.

“We just want to make sure that we can teach people and amplify the voice of each of the tribes when they perform so they can understand what they’re about because we are still here,” Martinez said. “It’s never been done like this. We did our research and we wanted to do it the right way using the right people in the city and our Indian community to tell the story the right way.”

The Suns don’t plan to keep this message confined to Arizona. Over the season, the Suns will wear these jerseys on the road in cities with large Native American populations to spread awareness about tribes across the country. The impact of these jerseys and the stories behind them should resonate.

“What this means to Indian Country and us right now is bigger than basketball,” Martinez said. “It’s going to provide dreams and hopes of all nations, not just the 22 tribal nations here, but across the country.”

The Suns plan to expand their relationship with Arizona tribes as well. This includes a grant to improve basketball and other athletic programs on reservations to help kids, like Martinez, who want to play basketball at higher levels. The grant will subsidize the necessary equipment and tools to help them reach their dreams.

“Our major hope here is to inspire the next generation of Native American basketball players and youth at large,” Wincott said. “The fact that we’re able to make this big of an impact through something like a uniform release just speaks to the power of sports and what it means for these communities.”

For the Native Americans in Arizona, the launch of City Edition uniforms will help spread awareness for the next generation who hope to see more representation at the professional level.

“I was just a rez kid from Fort Defiance growing up in Rio Puerco, with my shoebox and a sock dreaming I was going to make the NBA, and I did in another way,” Martinez said. “Basketball has taken me around the world, but it also brought me home for this big project and to bring it to life.”