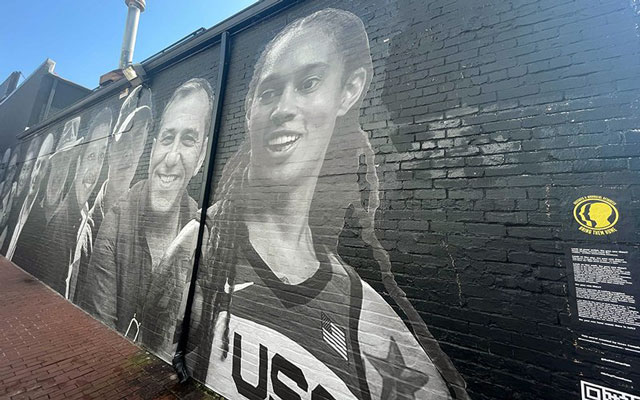 Photo By Daisy Gonzalez-Perez/Cronkite News: Phoenix Mercury star Brittney Griner is one of the faces, and the only woman, depicted on a new mural in Washington dedicated to Americans held hostage or wrongfully detained overseas. She has been held since Feb. 17 by Russia on drug charges.

WASHINGTON – In the five months since Phoenix Mercury star Brittney Griner has been held in a Russian prison on drug charges, the “Bring BG Home” campaign has gone global and Griner’s image has appeared on signs, social media, and at WNBA games.

And now, an image of a smiling Griner in her Team USA jersey dominates the “Bring Them Home” mural in the Georgetown section of Washington.

The mural, which was unveiled Wednesday, features 18 Americans who are being held hostage or have been wrongfully detained overseas. Organizers hope the mural can keep a spotlight on their cases and those of scores of other Americans in similar situations.

It came one day after President Joe Biden signed an executive order aimed at improving the flow of information to the families of hostages, expanding sanctions on criminals, terrorists, or government officials who wrongfully detain Americans and other measures.

“Our campaign seeks to urge President Biden to build off of his success,” said Jonathan Frank, a spokesperson for the Bring Our Families Home campaign. “They (government officials) need to make use of all the tools in the toolbox to bring others home, including but not limited to prisoner trades.”

Griner, who also plays professionally in Russia, was arrested on Feb. 17 at Moscow’s Sheremetyevo Airport, where authorities said they found a vape cartridge containing hashish oil in her luggage. She has been held ever since on charges of drug possession and smuggling, which carries a penalty of up to 10 years in prison.

Tension around her case was heightened by Russia’s invasion a week later of Ukraine, which has strained relations with the U.S. The State Department declared in May that Griner had been “wrongfully detained” by Russian authorities.

The Biden administration has said repeatedly that it is working to win the release of Griner, who wrote to Biden earlier this month and said she is “terrified I might be here forever,” according to news reports. She is one of at least 64 Americans being held hostage or wrongfully detained abroad, according to the James W. Foley Legacy Foundation.

After repeated court appearances and calls for her release by fans and teammates, Griner last week pleaded guilty. News reports said her attorneys produced a statement from her doctor that said she had been prescribed medical marijuana, and Griner reportedly told the court that she had been rushing to pack and accidentally brought the vape cartridges with her to Russia.

The Bring Our Families Home campaign was created in May to bring attention to hostages and wrongfully detained Americans and to push for their immediate release. At Wednesday’s event, organizers read the names of the 18 Americans depicted on the mural wall, followed by a minute of silence.

Players from the WNBA’S New York Liberty turned up Wednesday, posing in front of the mural with Bring Our Families Home flags and with one wearing a “We Are BG” T-shirt.

Griner’s is the first face visitors see as they turn off M Street into the alley where the mural is displayed. Some of the others depicted in the mural have been detained for years.

Isaac Campbell, the artist who spent several months creating the mural in a special process using flour, wheat, and paper, said it was an emotional process.

“As the artist, when I was receiving these pictures it was the most intense feeling to look at the images and put them next to one another and see the stories of these lives and families play out,” Campbell said of the stark black-and-white images.

But for Campbell it’s not just the mural – it’s also about creating something collaboratively to bring families together “to share in their grief and suffering and to use tools available to bring these families home.”

To him, those tools include telling the detainees’ stories through the power of social media, at the dinner table, and with legislators or representatives.