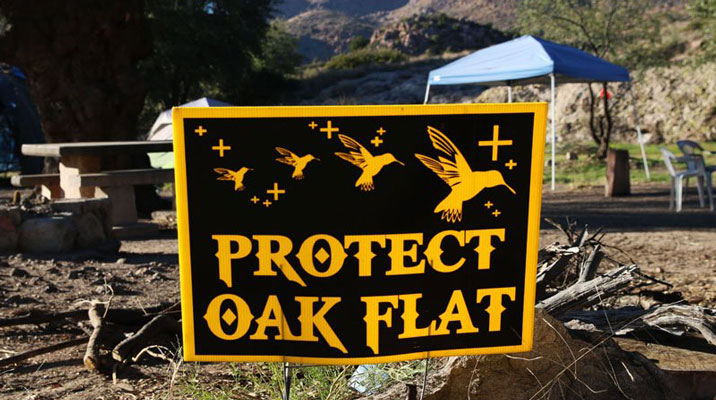 File Photo By Bri Cossavella/Cronkite News: Planning on the Resolution Copper Mine near Superior has been going on for years, as have protests like the one at this encampment in 2016. Opponents say the mine will destroy Oak Flat, an area sacred to the San Carlos Apache, and cause environmental harm. Supporters say the mine will produce jobs and much-needed copper.

The massive mine, proposed for construction in the Pinal Mountains 60 miles east of Phoenix would consume at the very least enough water to supply a city of 140,000 people every year for 40 years, Wells said.

“Should mining be getting more water while other water users are forced to cut back,” Wells asks. “This is a tough and urgent question that Arizonans must face in light of impending water shortages.”

Resolution’s potential massive groundwater withdrawal comes at the same time as Arizona’s surface water supplies are being drastically reduced. Federal water managers last month slashed Arizona’s share of the Colorado River delivered through the Central Arizona Project canal by 500,000-acre-feet, enough water to supply the needs of about one million people for a year.

The report was commissioned by the San Carlos Apache Tribe. Wells works for Santa Barbara, California-based environmental consultant, L. Everett & Associates. Wells has testified before Congress about Resolution’s profound and far-reaching impacts on groundwater aquifers beneath the desert plain abutting the Pinal Mountains.

San Carlos Apache Chairman, Terry Rambler, says the Wells report conclusively shows the mine should not be built.

“The Resolution Mine poses a grave and unacceptable impact to Arizona’s declining and finite groundwater supplies while surface water supplies are being reduced. This mine must not be
constructed,” Rambler said. “Our state Congressional delegation must work decisively to pass the
Save Oak Flat Act to stop the mine and to protect our water for future generations.”

Wells served on two committees that advised the Tonto National Forest on the preparation of
Resolution’s Draft Environmental Impact Statement and responded to comments received on the
DEIS. He warned the Forest Service of Resolution’s severe impacts on the aquifer in the East Salt River Valley.

Wells noted that private wells in Pinal County are already drying up and pointed out the severity of impacts identified by Tonto National Forest on aquifers in the vicinity of the mine site and the proposed tailings dump location on state land. Resolution’s mine would deplete the Apache Tuff aquifer that supplies Superior and Queen Creek.

Like all mining operations in Arizona, the Resolution Mine is exempt from state groundwater withdrawal regulations. The mine can pump an unlimited amount of water.

“The mine will use 775,000 acre-feet of water over the life of the mine, of which 70% will be pumped from a large network of new extraction wells in the East Salt River Valley,” Wells said. “That’s 250 billion gallons of water.”

Rio Tinto and BHP, two of the world’s largest, foreign-based mining companies, are poised to begin construction of the Resolution Mine in the rugged mountains between Superior and Globe. Construction of the mine hinges on a pending land exchange that would transfer ownership of 2,422 acres of Tonto National Forest to Resolution. The land includes Oak Flat, which Western Apaches and other southwestern tribes consider sacred and a fundamental part of traditional religious practice.

Oak Flat, also known as Chí’chil Biłdagoteel, is listed on the National Register of Historic Places as a Traditional Cultural Property. Resolution’s underground mine would cause Oak Flat to collapse into a mile-wide, 1,000-foot-deep crater.

The Save Oak Flat Act (SOFA) would repeal a law that requires Oak Flat to be traded to Resolution upon completion of environmental studies regardless of the far-reaching damage the mine would inflict. The Trump Administration published Resolution’s Final Environmental Impact Statement on Jan. 15, triggering a 60-day deadline to execute the land exchange. The Biden Administration’s Department of Agriculture withdrew the FEIS on March 1 stating that additional consultation with tribes was needed.

Rep. Raul Grijalva, D-AZ, introduced the SOFA earlier this year. The SOFA is currently included in the House’s $3.5 trillion budget reconciliation legislation. The SOFA would reverse
legislation approved in 2014 when a nongermane amendment was attached to the FY 2015 National Defense Authorization Act mandating that Oak Flat be traded to Resolution.

The Wells report was funded by a grant from The Mica Group with support from the William and Flora Hewlett Foundation.