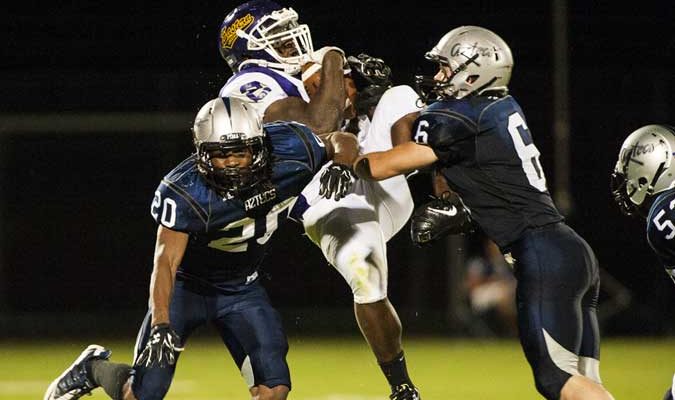 THATCHER – Fresh off their win in the Salt City Bowl, the Eastern Arizona College (EAC) Gila Monsters’ football team may soon have a tougher time finding opponents to battle. However, in-state recruitment could also rise in the coming years.

Both are the possible outcomes after an announcement last week from the Maricopa County Community College District (MCCCD) that it will eliminate the district’s football programs from its four schools – Phoenix, Mesa, Scottsdale, and Glendale community colleges – after the 2018 season. Those four schools, along with EAC, Western College, and Pima Community College in Arizona and Snow College in Ephraim, Utah, currently make up the Western States Football Conference (WSFC). With four teams cutting their program, the remaining teams face the possibility of having to play each other twice, and/or traveling out-of-state for games – most likely to Texas or Colorado, since California teams don’t play out-of-state and Snow is the only junior college team in Utah. New Mexico only has one team as well.

However, it is all speculation at this point, and who EAC will play in 2019 is unknown, according to Athletic Director Jim Bagnall.

“Obviously, it will affect us,” he said. “But we don’t know our options. We haven’t even gotten that far . . . We’re just gathering information and that’s all we’re doing right now.”

EAC head football coach John O’Mera said the announcement came like a bombshell. He said it will be tough moving forward because the parity of the conference has helped everyone compete and helped EAC with its post-season victories.

“We got hit with it and are kind of waiting to see the aftermath and see what is going to happen,” O’Mera said.

While the four teams stopping recruiting, a plus side for EAC could be that it will be more likely to get quality players from the Maricopa area.

“It could open up doors for us to fill that need and become more of an Arizona recruiter,” O’Mera said. “You hate to see anything go away for that to help out, but now they’ll definitely need an opportunity, so it could open up a great angle for us to get players.”

The Maricopa County Community College District’s decision was reportedly based on lack of funding. It stated that as state funding has been significantly reduced, the football programs account for roughly 20 percent of the district’s entire athletics budget and is responsible for more than 50 percent of the related insurance costs. Additionally, the district said its football facilities are in need of improvements to the tune of $20 to $30 million in the next three to five years, and that kind of investment is not feasible for the few amount of students it would affect. While some of the facilities are shared by other sports, football reportedly requires increased upkeep costs.

O’Mera said no matter what happens moving forward, losing the four teams is a tragedy for a group of young men who possibly will not have the same opportunity to receive an education they would have had. He said the WSFC not only regularly has 10 to 15 guys move on to Division I schools every year, but have many other athletes who move on to play at smaller four-year schools and ultimately receive a degree.

“A lot of those kids wouldn’t have gone to school without that opportunity,” O’Mera said. “They get in and they find something that they’re interested in and they make a career out of it . . . We’re definitely a chain that helps kids go all over the United States to get their education paid. It’s definitely going to affect a lot of kids.”

After the news struck, there has been a movement to attempt to raise funds to convince the MCCCD to continue the program, but that movement is in too early of a stage to know how that would work.

What is known is EAC appears to faithfully support its football team continuing to play, as well as Pima, Western and Snow. So, there will likely be a 2019 season for the Gila Monsters, but they just aren’t sure what it will look like.