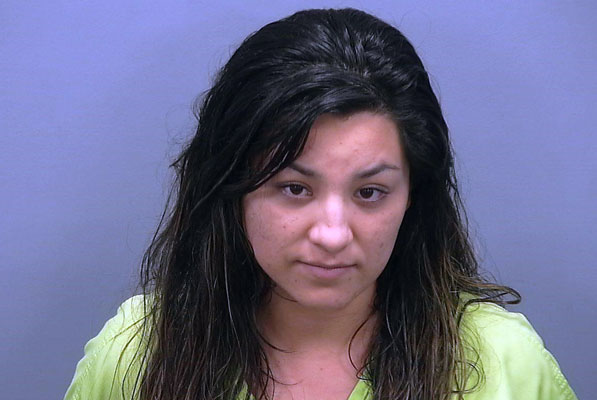 Contributed Photo/Courtesy GCSO: Venicia Montez – the lure in an alleged drug dealer kidnapping case – was sentenced to 7 years on probation for her role.

SAFFORD – A woman who reportedly was the bait in a kidnapping scheme to steal money and drugs from an alleged heroin dealer was placed on probation for 7 years for her role in the crime.

A co-conspirator, Bryan Antonio Medina, 20, previously took a plea deal in May 2019 and was sentenced in November 2019 to 5 years on intensive probation on one count of conspiracy to commit kidnapping. The plea agreement dismissed other charges of kidnapping and robbery. He was also sentenced to 180 in jail with credit for 180 days served.

The alleged main perpetrator of the crime, Serjio Esekial Garcia, 29, also previously received a term of 5 years on intensive probation after efforts to contact the victim to aid in the prosecution failed. The victim was learned to be alive and well, however, he apparently didn’t wish to have anything to do with the case.

In December 2019, Garcia pleaded guilty to kidnapping and aggravated assault with a deadly weapon and was sentenced to 5 years of intensive probation. On a separate case, he also pleaded guilty to burglary in the second degree and aggravated assault/domestic violence in exchange for the dismissal of charges of robbery and theft. He received a concurrent 5-year term on intensive probation in that case. Garcia was already on probation for charges of attempted possession of a dangerous drug and possession of drug paraphernalia when he received the new charges and his probation was subsequently revoked and he was sentenced to 1.5 years in prison with credit for 139 days served. His period of probation will begin upon his release from the Arizona Department of Corrections.

A second man was never charged in the case despite being identified by Medina as being involved due to a lack of evidence and witness cooperation.

According to Graham County Sheriff’s Office reports, Montez allegedly lured the victim to her residence in a small community of manufactured homes off Calle Mesa Verde just north of Airport Road on Dec. 6, 2018, under the guise of drinking some beer and watching some movies.

Shortly after the victim’s arrival, Montez excused herself to take some clothes to the next-door residence where her son was staying, and just after she left two Hispanic men wearing ski masks came out of a back bedroom and ordered the victim to the ground at gunpoint, according to the Sheriff’s Office reports.

The victim said the men took his shoes and wallet and beat him with a cane and the gun, which he described as being a black handgun “Walther P-22 style”.

After zip tying his hands behind his back and placing a mask on his head, the men forced the victim into a car that had pulled up outside and they drove him to another residence where they allegedly beat him and threatened to burn his eyes with a blow torch if the victim didn’t give them his money and “stuff”, according to the victim.

The victim said the men might have gotten the idea that he had money due to a Facebook post he made. He said the perpetrators stole his two cell phones, necklace, watch, baseball cap, and his wallet, which had $50 in cash and various cards. During the ordeal, one of the men allegedly told the victim, “You’re going to (expletive deleted) die tonight.”

At one point, the men took the victim back into the car and drove to another location where one of the abductors went into another residence while leaving the driver, later identified as Medina, to hold the gun on the victim in the car.

The group then went back to the initial area of the abduction, and as they were walking the victim back into a residence when the victim said he took off running to another house and yelled for help. At that time, an occupant at the house the victim ran to cut the zip ties off the victim’s wrists and the police were called. Coincidentally, according to a Sheriff’s Office report, the man who was never charged was currently staying at the residence the victim ran to for help and the woman who the victim initially began the evening with has a child in common with Garcia.

Deputies were dispatched to the residence at about 10:07 p.m. After contacting the victim and hearing his tale, deputies and the victim went back to the originating residence and located Montez, who the victim had started the evening with.

Montez initially said she and her son were the only ones in the house, but a search of the residence yielded her brother and cousin, Medina, in a back bedroom.

When Medina was contacted, he initially denied being in the area at the time of the abduction and denied having a car – he would later find to be lying on both counts.

The victim recognized a necklace Medina was wearing and identified him as the driver. A key fob to Medina’s red, 2001 Honda Civic was found in his pocket and the vehicle was located parked outside. The car was identified by the victim as the one he was forced to get into and the victim’s stolen wallet was located inside the vehicle.

After initially denying knowing the abductors, a few days later Medina, who had been jailed for the incident, advised that his cousin (Montez) was in on the crime and identified the two alleged kidnappers. Medina advised Garcia was the one who held the gun for most of the night and that the men were trying to get the victim to tell them where his stash of two ounces of heroin was. Medina said the victim told them he would get it for them if they let him live, but that they had to let him go for him to get it.