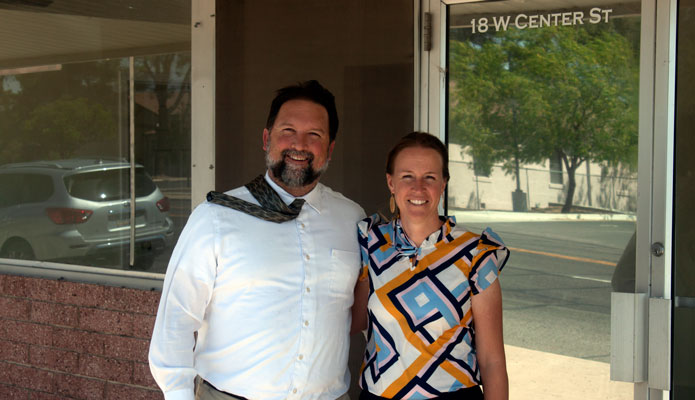 Jon Johnson Photo/Gila Herald: Brian and Angela Paull are renovating a building in the heart of Pima to turn it into a hometown pharmacy.

PIMA – The “good ol’ days” are often romanticized as being a simpler time where children could play outside without fear, people got dressed up to take a flight, and concerts were viewed without a thousand little screens blocking the band.

Well, the rural town of Pima is a throwback to a simpler, some say better, time, and it will soon have another example of yesteryear – the hometown pharmacy.

After years in the planning, pharmacist Brian Paull and his wife, Angela Paull, are now moving forward with renovating the building at 18 West Center Street into the Palo Verde Pharmacy, complete with a variety of over-the-counter medications as well. The building is about 2,400 square feet and is located next to the Eastern Arizona Museum & Historical Society.

Angela Paull said the name was a nod to her mother who passed away about two-and-a-half years ago. She said the Palo Verde tree was her mother’s favorite.

“It’s something to remember her by,” Angela Paull said.

The Palo Verde Pharmacy will be a one-stop-shop for all one’s prescription pharmacy needs with a pharmacist who will likely recognize patrons by face and can also make specialty prescription drugs called compounding for those who need it. A compounding pharmacist can specially make prescription medicines to not have a specific ingredient used in normal applications in cases where patients are allergic to the ingredient or just don’t want a specific ingredient in their medication, such as red dye. However, compounding is not covered by insurance and will have to be paid out of pocket by the consumer.

“We kind of want to make it where you know your pharmacist and they know you and everybody is a big happy family,” Brian Paull said.

Brian is set to man the shop by himself in the beginning, being your one-stop to deal with all your pharmaceutical needs.

“It’s a service that we wanted to bring to the community,” he said. “It’s a great community and it’s a needed service.”

According to Angela Paull, demolition of the current interior was set to begin this week, and construction is expected to take about eight weeks. After the renovation is complete, she said it will likely take about another month or so to fully stock everything needed to open. That timetable puts the pharmacy opening around August.

The pharmacy will offer curbside service, as well as delivery of medications, according to Angela Paull.

“We want to offer something that Pima needs,” she said. “We like the hometown feel of Pima and we want to put that into the pharmacy. We want to offer services that you can’t get at Walmart like delivery or compounding services.”

The pharmacy will have its own website and a mobile app that people can utilize to order up refills and pay for their medications.