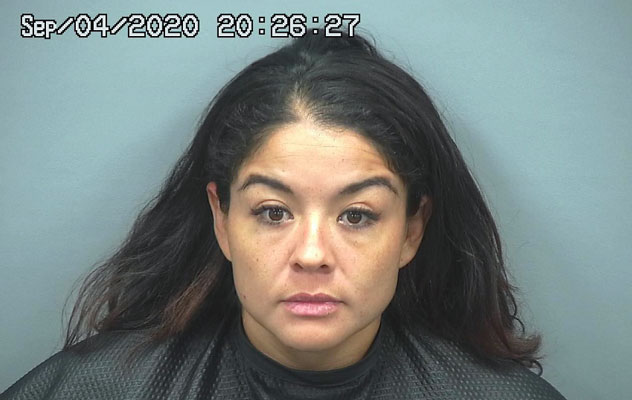 Contributed Photo/Courtesy GCSO: Oralia Moreno, 31, was arrested and booked into jail on a warrant for drug offenses and faces additional drug charges after a traffic stop located heroin and meth in her possession.

Passenger found in illegal possession of a machete

SAFFORD – An equipment failure led to the arrest of a homeless woman who reportedly was driving while in possession of heroin and methamphetamine.

According to a Safford Police report, Moreno was a passenger in a Chevy Colorado that was operating westbound on U.S. Highway 70 without a working left brake light and no visible license plate light. An officer recognized Moreno and believed she had a warrant for her arrest.

The officer initiated a traffic stop, and the Chevy pulled over into the Speedway gas station at 300 E. U.S. Highway 70. Upon contact, the officer noticed a machete knife on the front floorboard. Additionally, the driver – identified as Jacob Elias Robledo, 27, – could not produce a driver’s license or insurance for the vehicle.

Both Robledo and Moreno appeared nervous and were breathing heavily with their hands trembling, according to the report.

Robledo, who is a prohibited possessor of weapons due to a previous felony conviction, allegedly admitted to using heroin three days before the stop. He was advised that a charge of possession of the machete would be pending review by prosecutors and was released at the scene.

After confirming her warrant, the officer questioned Moreno if she had anything illegal on her and she advised there were items of that nature in a red Crown Royal bag inside a blue bag in the vehicle and that everything in it was hers. A usable quantity of heroin, meth, and marijuana was located in Moreno’s possession, along with various items of drug paraphernalia.

Moreno was then booked into the jail on her above-listed charges and the machete was seized as evidence.