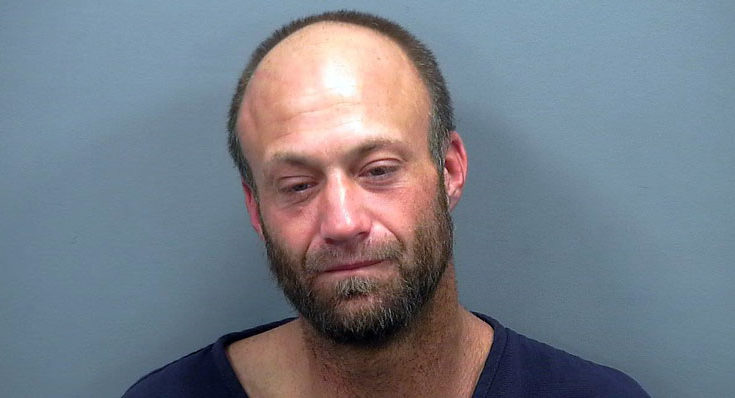 Contributed Photo/Courtesy GCSO: Derek Carpenter was arrested and booked into the Graham County Adult Detention Facility for unlawful use of means of transportation, theft, burglary, and prohibited possession of a firearm.

SAFFORD – Derek Albert Carpenter, 39, was arrested and booked into the Graham County Adult Detention Facility on charges of unlawful use of means of transportation, burglary, theft, and prohibited possession of a firearm.

Carpenter was arrested after being found in a vacant residence with his grandmother’s stolen Chevy Malibu parked outside and a loaded shotgun in his possession. According to the homeowners, the shotgun was supposed to be in a closet in the home and nobody was allowed inside the residence, which is being periodically cleaned out of its contents.

According to a Safford Police report, the initial victim contacted authorities on Dec. 26, 2019, at about 6:33 a.m. after realizing her white, Chevy Malibu was missing. She believed her grandson, Carpenter, who is homeless and sometimes stays in an old, nonworking vehicle in her backyard, was the culprit.

The victim said she had allowed Carpenter to come inside and fed him a burrito. After he left, however, she noticed her Christmas cards she hadn’t sent out yet were opened and the cash that was in them was missing.

When she noticed her car was also missing the next morning, she said she believed Carpenter took her keys and then came back later that night and took her car.

The Malibu was fitted with OnStar and was located at a residence on 8th Avenue that was learned to be vacant.

Carpenter was located at the residence, which had a window broken. He said he had his grandmother’s permission to use her car and that the house belonged to her. The homeowner’s daughter was contacted and said her mother lives with her sister and nobody was supposed to be in the 8th Avenue residence. She also reported that another relative saw Carpenter sitting on some steps behind the house the previous day and told him to leave.

In addition to the shotgun being moved, Carpenter was also found in possession of various sets of keys that were previously inside the residence. A search of the residence showed that it had appeared to have thoroughly been rummaged through.

Carpenter previously agreed to a plea agreement on charges of theft, failure to comply with a court order, aggravated assault, disorderly conduct, and burglary, but he has yet to be sentenced on the plea agreement.