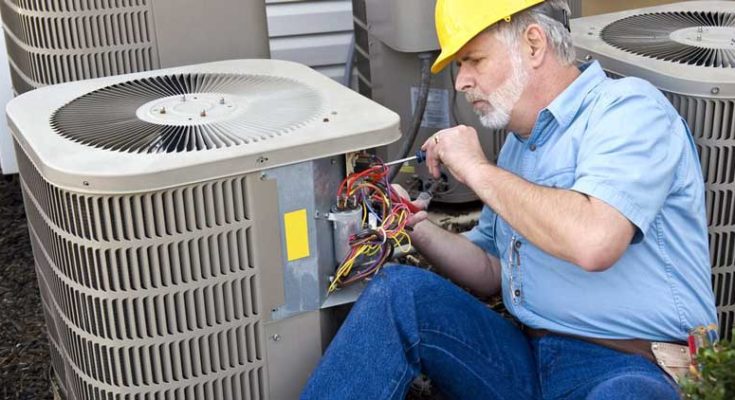 Part two of a two-part series

Say what? How can it be that that mysterious part of your air conditioning system that has to do with the “gas” in it that makes it work, have something to do with airflow? Because as every well trained HVACR technician knows, the only way a refrigeration system can perform its fundamental function of “….transferring heat from a place where it’s not wanted to a place where it’s not objectionable”….(that’s the formal definition of the science of refrigeration related to comfort cooling systems we just snuck in on you there)… the way it’s supposed to, there has to be a balance achieved between the operation of the refrigeration segment of the equipment and the airflow segment.

And, there are some very specific tests that can be accomplished in order to determine whether or not the required balance of operation between an airflow system and a refrigeration system is, in fact, happening.  And these tests aren’t limited to just hooking of a set of gauges to an air conditioning system and deciding “Well, let’s add a little gas to see if we can get this air conditioner to work a little better.”

Really testing the operation of a central air conditioning system begins with what technicians refer to as data collection points in which information about not only operating pressures is obtained, but also about temperature. 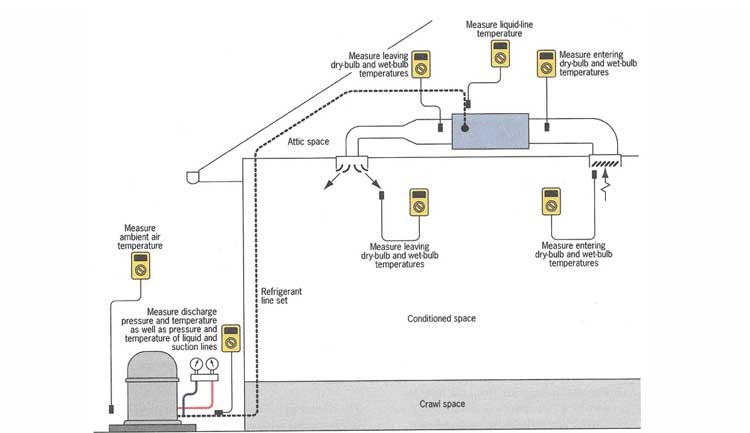 Our illustration shows a typical air conditioning system used in the Southwest, known as a split system. One half of the equipment sits outdoors next to your home, and it is connected to the other half of your system that you likely never see, the air handling segment that is located above the ceiling. Your outdoor unit consists of the system compressor and condenser coil, and within your indoor air handling unit is the evaporator coil.

As we said in part 1, when it comes to air conditioning system coils, they must be clean and able to allow the correct amount of air flow through them in order for the system to work properly. If both, or either one of them are dirty, then the system simply cannot perform as it is designed to do….regardless of how much “gas” is added.

As someone who isn’t an HVACR professional you don’t have to know all the details of the factors we’re showing about these data collection points, but, there is one common sense thing that you do need to understand, and it’s a simple question:

What if the person who shows up to perform a seasonal maintenance check on your air conditioning system only does one thing as far as collecting data on the performance of the equipment (checking refrigerant pressures) and doesn’t perform any of the temperature tests?

The answer to this question is simple. Without thoroughly checking the operation of an air conditioning system, the chance that adding gas will result in a system overcharge is not just possible, but probable. The unfortunate statistic resulting from industry surveys is that the majority of comfort cooling systems that have been serviced and have had refrigerant added to them are operating with what is known as a system overcharge, a situation that not only wastes money because the system is being overworked, but leads to premature compressor failure.

The most common reason that a system winds up overcharged is that data collection is not sufficient, which results in neglect of the indoor coil when it needs to be cleaned. And we’re sure you can appreciate the reason behind that. Accessing the indoor coil can be very difficult and time-consuming, which means that it’s not something that is going to be included in specially priced seasonal check-up on your air conditioning system.

But, as we said, take heart. Caring for your air conditioning system can be done properly. When you call a professional who collects all the required fundamental data to evaluate the performance of your equipment, and when necessary, performs the more involved evaluations (yes, there’s even more to it than we’ve talked about) that determines what repairs, adjustments, or maintenance your system requires, you can be sure that you’ll stay comfortable and your system will operate efficiently for many years.