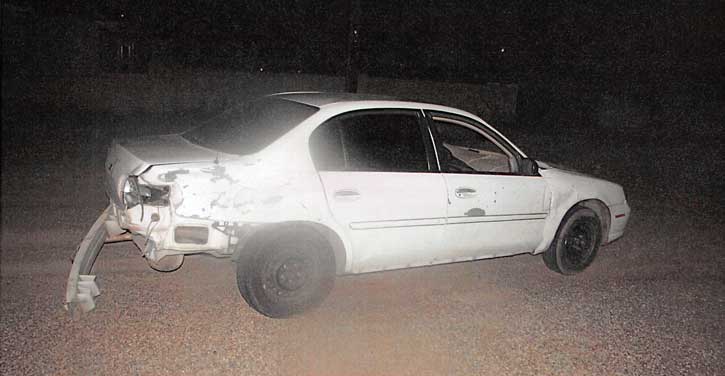 Contributed Photo/Courtesy SPD: This white, 2000 Chevrolet was reportedly involved in a hit-and-run collision. The vehicle’s bumper was dislodged in the crash.

SAFFORD – An alleged hit-and-run driver was located Saturday evening after two witnesses found his vehicle’s license plate, which had been knocked off during the collision.

Nardy Gene Huffman, 33, was given a citation for leaving the scene of an accident and for driving without having a valid driver’s license.

A Safford Officer was dispatched at about 10:04 p.m. to the intersection of U.S. Highway 70 and 20th Avenue after a Thatcher officer came upon the scene and informed them of the situation. Upon arrival, the Safford officer located a gray, 2015 Mazda in the right-hand turn lane facing eastbound. The Mazda had damage to its front passenger side and had a flat front passenger tire.

According to the occupants of the Mazda and corroborating witnesses, a white, Chevrolet four-door sedan was westbound on U.S. Highway 70 when it attempted to make a left turn (southbound) onto 20th Avenue in front of the eastbound Mazda, which had a green light.

The Mazda struck the rear of the Chevy, and the Chevy continued southbound onto 20th Avenue.

The Thatcher officer reportedly changed the flat tire on the Mazda to make the car drivable, and the occupants left after being given a victim’s rights form.

A couple witnesses located the Chevy’s license plate, which had become dislodged in the collision, and the officers went to the registered owner’s address in an attempt to locate the driver.

Safford officers located the registered owner of the Chevy, and she advised she didn’t know where her car was or who was driving it. As the Safford officers spoke to the registered owner, the Thatcher officer went in the direction the suspect car reportedly went and looked for debris. His search was successful, and he soon came upon an entire bumper that apparently fell off the car. The officer then informed the other officers that he had found the suspect vehicle with Huffman and another female, both of whom were intoxicated. The vehicle was found in a dirt alleyway in the area of the 2500 block of Relation Street with damage to its rear and was missing its bumper.

As the Thatcher officer approached, he heard Huffman tell the female to “don’t say (expletive deleted).” Huffman later blew a .265 breath/alcohol concentration on a portable breath test. He advised that he had been in the collision and then parked the car in the alley and started to drink a bottle of liquor after he parked. An empty liquor bottle, which was labeled as 49.5 percent alcohol, was located on the driver’s side floorboard. According to the Thatcher officer, there was about 30 minutes between the initial stop at the collision site and locating Huffman.

Due to not being able to determine if Huffman drank the alcohol before the collision or afterward like he stated, the Safford officer only gave him a citation for leaving the scene of an accident and driving without a valid driver’s license. The car was towed from the alley.

‘Mom, I’m not in the yearbook’