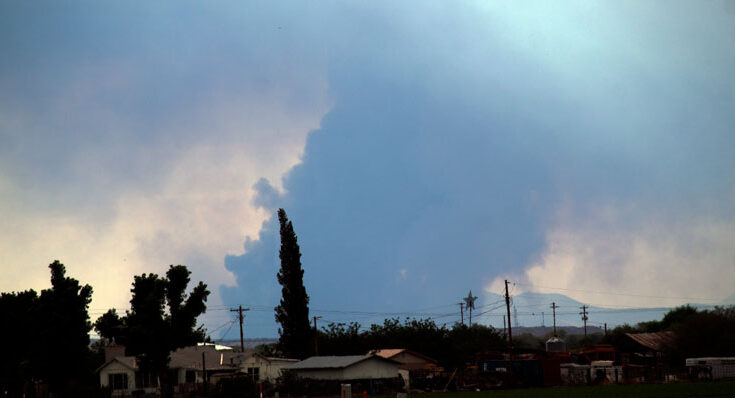 Jon Johnson Photo/Gila Herald: Smoke rises from a new wildfire near Bylas by the Gila River. The fire has prompted the closure of U.S. Highway 70.

Update: The highway was reopened around 7 p.m. per ADOT

BYLAS – U.S. Highway 70 eastbound has been closed due to a new wildfire west of Bylas.

The brushfire was first alerted by the Arizona Department of Transportation at 12:03 a.m. and the closure was announced at 4:21 p.m.

The closure is from Gila River (MP 293) to Yellowjacket Road (MP 289). There is currently no estimated time for the highway to reopen. The closure is just west of Bylas.

The new wildfire started the day after the command of the Bottom Fire was transferred to local crews. The Bottom Fire was started by lightning on June 28 roughly seven miles west of Bylas and burned along the Gila River toward San Carlos Lake. As of Sunday, that fire was 94 percent contained after burning 4,655 acres.

Highway 191 north between Morenci and Alpine remains closed due to the Bear Fire, which has burned more than 24,000 acres.

The Bear Fire started June 16 about 10 miles south of Hannigan Meadow, and the highway has been closed since June 20. The closure is from milepost 176 to milepost 250.