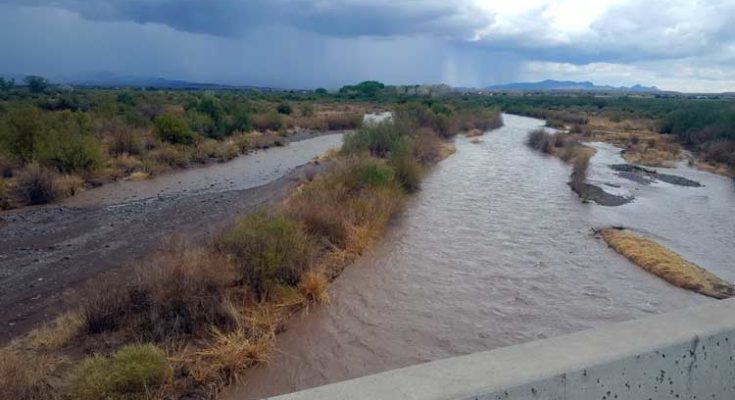 Contributed Photo/Courtesy Bill Brandau: This picture of the Gila River was taken from the Solomon Bridge at about 2:45 p.m., Wednesday, when the river was flowing at about 800 cubic feet per second.

GRAHAM AND GREENLEE COUNTIES – A downpour of three inches of rain in the Gila River Basin in New Mexico on Tuesday prompted flood warnings for the communities down river.

The National Weather Service issued a flood advisory for Duncan and Solomon at areas near the Gila River that was in effect until late Wednesday night. According to the warning, the river was at 5.5 feet at 2:30 p.m. Tuesday and it predicted it would rise to 16.6 feet by Tuesday night. The flood stage is 20 feet.

According to Bill Brandau, University of Arizona Graham County Cooperative Extension Area Agent, the Gila River peaked in Virden, New Mexico, on Tuesday and was flowing at about 10,000 cubic feet per second (CFS). One CFS is equivalent to about seven gallons of water.

The flood record at the Safford gauge occurred during the historic October 1983 flood and was measured at 132,000 CFS.