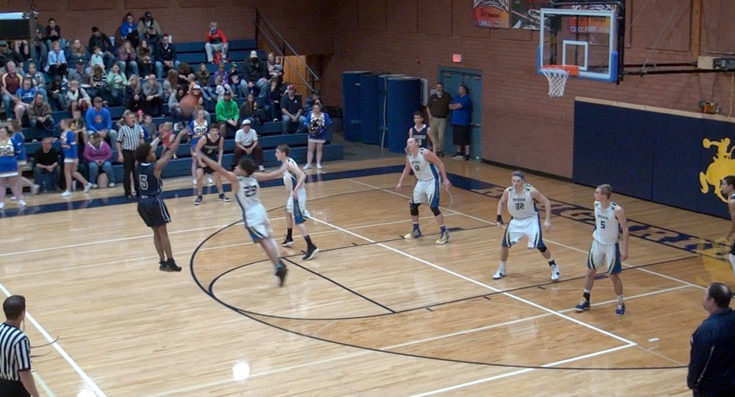 Jon Johnson Photo/Gila Herald: The Gregory School’s Demari Harris hits one of his six 3-pointers in the first half against Pima. The Hawks came back to beat the Roughriders, 59-55.

Shades of Webber’s infamous timeout call during the 1993 NCAA championship game when Michigan didn’t have any timeouts left reverberated throughout Pima’s gymnasium as Dawson Pruszynski called a timeout after getting an inbounds pass with just 2.8 seconds to play and down three points. The trouble? The game scorer said Pima was out of timeouts, which caused the referees to call a technical foul and end Pima’s chances at a miraculous game tying shot.

“I was happy to have a hard-fought game by both teams,” said The Gregory School head coach Craig Everson.

Coaches from Fort Thomas, Thatcher, and Morenci were all in attendance, along with the Safford athletic director to witness the event.

Pima head coach Cliff Thompson said he believed the scorekeeper made a mistake and Pima shouldn’t have been assessed the technical foul.

“I’m 97 percent sure we had a timeout because there was a mistake somewhere,” Thompson said. “I don’t know what it was. I could be wrong, but what I am happy about is that we played extremely hard. I think we did a better job than we did against Thatcher as far as we didn’t just give them run outs like Thatcher got . . . We missed some shots (and) we did turn it over but we turned it over in a way that we were able to get back and play defense.”

The thing is, Pima shouldn’t have been in that position to begin with.

Yes, they were playing the Tucson The Gregory School Hawks, who are the reigning 1A State Champions after besting Fort Thomas for the honor last year. And yes, the Hawks have only lost two games this year, both to 3A schools (75-72 to Amphitheater and 89-77 to Casteel), but the game was Pima’s to lose, and they did.

The Roughriders were in control for virtually the entire game, and the Hawks only took their first lead with just 3:27 left in the contest when Tomari Harris hit two free throws to go up by one, 50-49.

But he wasn’t alone in his excellent play. The Roughriders played well as a team. They played good defense, they got the ball out on the fast break, and got the ball to Levi Thygerson on the run multiple times. Thygerson had one of his best games of the season and finished with 16 points – most of them scored in transition.

But while Pima appeared to dominate, The Gregory School hung around and, eventually, found a way to win.

A big reason for that was the play of the team’s twin guards, Demari and Tomari Harris, and Josiah Prior.

Demari was unreal in the first half as he scored 18 of his game-high 33 points on six 3-pointers. His play kept the Hawks only down by two after the first period and by three, 33-30, at halftime.

The third period saw more of the same dominance for Pima; Pruszynski was doing his thing down low, Thygerson was getting loose on fast breaks and Tim Salyer was getting to the bucket.

But after three periods of play, Pima had only increased its lead by one, 43-39.

One reason for that was the amount of foul shots put up by the Hawks. The referees were calling a very tight game and neither team adjusted to the style of the calls, thereby resulting in plenty of trips to the foul line. The Hawks were assessed 16 fouls for the game, while Pima was whistled for 23 and the aforementioned technical.

“He (Demari) started getting some free throws and that was a little bit frustrating but I think we did a much better job holding him down in the second half,” Cliff Thompson said. “But, he’s a great player too. They’re a good team. They’re probably the favorites in 1A. I’ll be shocked if they’re not.”

After the Roughriders extended their lead early in the fourth period with a tough spin-move shot by Whitaker and nice assists from Hayden Ashby and Salyer to Thygerson, the Hawks began to get to the bucket and get to the free throw line as they clawed their way back into the game.

About halfway through the period, the Hawks also clamped down on defense, causing a small point swing as they forced Pima to turn the ball over while they continued to score with circus layups by the Harris twins and Prior. And before anyone knew it, the Hawks were up by three with only a couple of minutes left to play.

Pima then got serious, and Alec Judd nailed a 3-pointer to tie the game and Salyer blocked Tomari’s layup attempt. The ball went out off Tomari, giving Pima the ball and the chance to reclaim the lead.

However, the Hawks’ 6’4” sophomore forward Brightstar Benson made his biggest play of the game by blocking Pruszynski’s shot attempt and collecting the turnover. Demari then squared up at the far right corner and zipped into the lane for a runner that gave the Hawks the lead, 56-54.

“No matter who had the ball, we trust each other, so we were all god,” Demari said.

The game then came down to foul shots as Pruszynski tied it up by nailing his two free throws. Demari came back to his two of his own, and then Salyer got 1-2 to fall. Anderson Mort missed his first and was called for a line violation on his second to give Pima a chance to go up with only seconds left.

With 16.6 seconds in the game, Pima came down to score but the Hawks knocked the ball out of bounds. Then, with 9.6 seconds to play, Cliff Thompson drew up a play and Salyer had Pruszynski open mere feet from the basket. But his soft toss to Pruszynski was tipped by Tomari. The Hawks recovered, and the Roughriders fouled Tomari with just 2.8 seconds to play. Tomari then nailed two free throws to pad the lead to 58-55.

The debacle over the timeout called when Pima didn’t have one (much to the chagrin of Cliff Thompson) then happened and Demari hit 1-2 on the technical foul to put the nail in the coffin.

“I figured we would close it out at the free-throw line,” Everson said. “I felt pretty confident about (that). I trust these guys . . . I’m so proud of these kids and how they play for each other.”

The Roughriders will next travel up The Hill to face the region leader Morenci Wildcats on Tuesday, starting at 7 p.m.

Morenci, (12-5 overall, 7-0 region) the No. 2-ranked team in the state for 2A, utterly destroyed Willcox on Friday night, 64-15. The Wildcats hope to solidify their place atop the 2A East with a win against Pima at home Tuesday, starting at 7 p.m.

The Thatcher Eagles (15-7 overall, 5-1 region) blew out the Bisbee Pumas 74-42. The Eagles will next host the Tombstone Yellow Jackets on Tuesday, starting at 7 p.m.

The Safford Bulldogs (12-5 overall, 2-0 region) beat the Tucson Catalina Trojans 63-57 at home Friday night and then lost on the road to the Blue Ridge Yellowjackets, 76-66, on Saturday. Safford will next travel to Tucson Sabino to face the Sabercats in a regional game Tuesday, starting at 7 p.m.

The Fort Thomas Apaches (15-6 overall, 3-0 region) bested the Cibecue Wildcats 74-54 on Friday and beat the St. Michael Cardinals 77-30 on Saturday. The Apaches will next face the Ray Bearcats at home Tuesday, starting at 7 p.m.

The Duncan Wildkats (6-8 overall, 1-3 region) lost to the Arete Prep Chargers 70-49. The Wildkats will next host the Hayden Lobos on Tuesday, starting at 7 p.m. 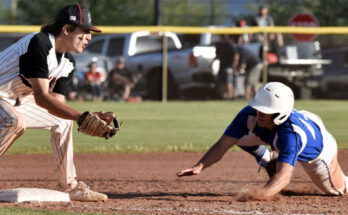