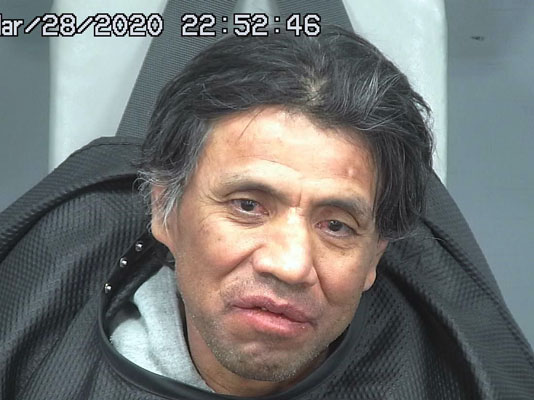 Contributed Photo/Courtesy GCSO: Roughly five hours after his release, Jonathan Wilson had two encounters with police officers, got intoxicated enough to blow a .340 on a portable breath test, and was booked back into jail on new charges after being medically cleared.

SAFFORD – Just a few hours after being released from the Graham County Adult Detention Facility, Jonathan Wilson was booked back into the jail after having two separate police encounters.

An officer was initially dispatched at about 6 p.m. on March 28 to the Best Western Plus hotel at 450 S. Entertainment Ave. regarding a disturbance. Wilson had just been released from the jail at about 3 p.m.

Upon arrival an employee advised that a man had come into the lobby and asked her for money for food. After replying that she didn’t have any, the man – later identified as Wilson – allegedly pointed his fingers like a gun and asked if she thought her family’s lives were precious. The officer reviewed surveillance footage that corroborated the lobby clerk’s version of events.

The hotel advised that it didn’t want to press charges against Wilson, but just wanted him trespassed.

Wilson was found at the Speedway gas station at the intersection of Highway 70 and First Avenue and appeared very intoxicated, according to the report. Wilson became combative with the officer but acknowledged that he wouldn’t be allowed back at the hotel.

About two hours later, an officer was dispatched to Thriftee Food & Drug at 755 S. Central Ave. regarding a disruptive man harassing customers and who had profanely refused to leave. The man, identified as Wilson, had also followed a woman to her car and banged on her windows as she tried to leave, according to calls to police.

Upon arrival, Wilson was located in the store. Upon being escorted outside, officers noticed a pile of plastic bags containing partially eaten chicken, several empty Four Loco alcohol beverage cans, a bowl of Ramen and other food items. A store clerk advised the items belonged to Wilson. The officer requested Wilson clean up his trash and he allegedly refused.

According to a store manager, Wilson was harassing customers by touching and yelling at them and that he refused to leave the premises.

Wilson, who appeared to be extremely intoxicated according to the officer, was arrested for criminal trespass in the third degree and criminal littering. However, Wilson did not go quietly and had to be placed in a hobble restraint after refusing to stop kicking the patrol vehicle’s doors and window, according to the report.

Wilson was taken to Mt. Graham Regional Medical Center due to his high-level of intoxication. While at the hospital, Wilson allegedly continued to be belligerent and yelled profanities at the staff.

After being medically cleared, he was taken to the jail, where a portable breath test registered his breath/alcohol concentration at .340. While that number is roughly three times the threshold for the jail since he had medical clearance from the hospital he was booked and accepted.