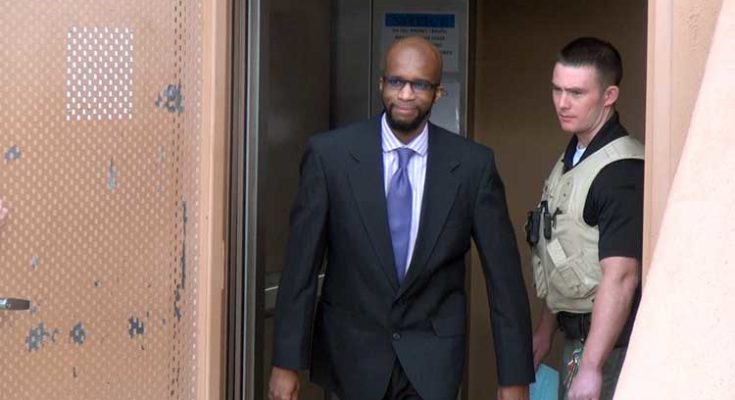 Jon Johnson File Photo/Gila Herald: Salih Abdul-Haqq Zaid makes his way from the courthouse elevator after closing arguments Friday. After two days of deliberations, the jury found Zaid guilty of manslaughter in the shooting death of Jared Garcia after an altercation at a local bar.

SAFFORD – After two weeks of trial, it took the jury nearly two full days to come to a unanimous decision that Salih Abdul-Haqq Zaid, 40, is guilty of manslaughter in the April 26, 2017, fatal shooting of Jared Michael Garcia, 35. The jury found Zaid was not guilty of first-degree murder and they couldn’t come to a unanimous decision on second-degree murder.

The jury also found Zaid guilty of aggravated assault with a deadly weapon, aggravated assault, endangerment, disorderly conduct with a weapon, and unlawful discharge of a weapon within city limits. His charges were designated as dangerous crimes, thusly increasing the amount of prison time available.

Zaid’s attorney, Dennis McCarthy, had argued that the shooting was justified self-defense, but the jury apparently believed the testimony of the multiple witnesses and the evidence at hand – including Zaid’s own admission to police – that he had committed the act out of revenge for being “punked” earlier in the night at the Bull Pen bar. The shooting occurred after Zaid had left the premises, seemingly returned to his residence and, according to the prosecution, retrieved his AK-47 assault rifle. Zaid then returned to the Bull Pen bar and the night ended with him shooting Garcia in the parking lot.

While Zaid appeared upbeat for the trial and deliberations, he sat nearly alone in the courtroom after the jury was excused for the day, his hand on his chin looking sullen in defeat.

There was no cause for celebration at the prosecutor’s table, however, as those assembled looked disappointed in the lesser verdict of manslaughter.

The case will now move to its sentencing phase, where the prosecution and defense will argue over aggravating and mitigating factors. Graham Couty Judge D. Corey Sanders may or may not be the sentencing judge due to his retirement. The jury was not released and will hear the attorneys’ arguments during an aggravation hearing Wednesday morning, starting at 9 a.m. Zaid is looking at more than a decade in prison.