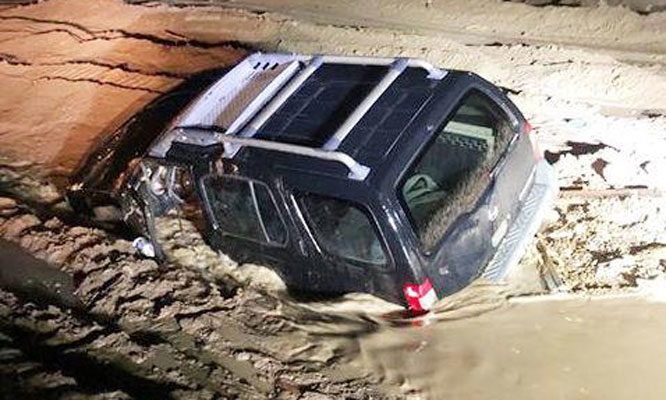 Photo By Graham County Search and Rescue: A man was rescued out of this flooded Nissan Xterra on Saturday night after he drove down by the Gila River during a flash flood warning.

GRAHAM COUNTY – A man who avoided flash flood warnings Saturday night and instead drove on a farm road down by the Gila River was pulled out of his flooded SUV by Graham County Search and Rescue.

According to a Graham County Sheriff’s Office report, a man identified as Rory Long had driven his 2007 Nissan Xterra down to the area by the Gila River off First Avenue in Thatcher. While traveling eastbound, Long got stuck and was overtaken with water at about 8:30 p.m. He then called Thatcher Fire Chief Mike Payne and told him of his predicament.

A Sheriff’s Office deputy met with Payne, who advised that several people were now out looking for Long in the area. The deputy told Payne to contact those searching and tell them not to drive around the river area due to flooding.

The deputy then went looking for Long, who informed him that he might be in the area behind the Stargazer 5 movie theater. Long said he wasn’t injured but his SUV had slid off the road into a wash and was overtaken by water.

Graham County Search and Rescue was paged and began searching for Long using UTV’s. A short while later, a local farmer who works the surrounding crops located Long roughly a quarter-mile east of First Avenue, stuck in a wash.

SAR members descended on the position and pulled Long from the disabled vehicle, which had water running through the interior.

Long denied medical attention and was picked up by a family member. He advised he would retrieve his SUV after the water receded.