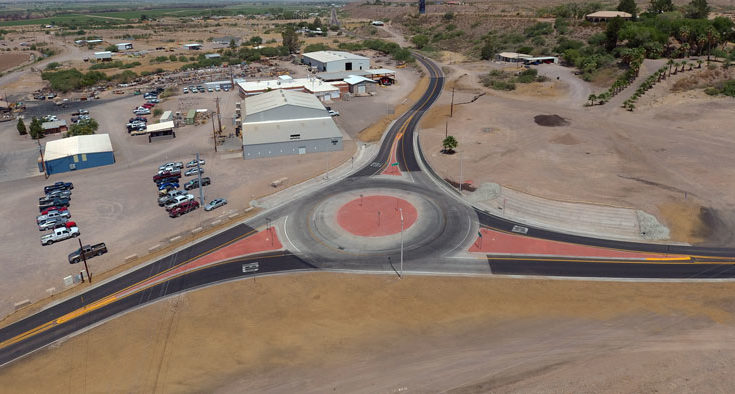 Jon Johnson Photo/Gila Herald: Graham County’s roundabout at the “Y” intersection of 8th Avenue, Safford/Bryce Road, and Airport Road has been in operation for about two weeks without an incident.

GRAHAM COUNTY – A previously dangerous three-way intersection has been significantly improved by the implementation of a roundabout, according to local leaders.

The Graham County roundabout – located at the “Y” intersection of 8th Avenue, Safford/Bryce Road, and Airport Road, has been up and running for about two weeks and is working as predicted with no incidents to date, according to Graham County Sheriff P.J. Allred.

The project was made possible by an Arizona Department of Transportation (ADOT) safety grant to install the roundabout at the intersection. ADOT not only supplied the lions-share of the funds but also oversaw the project and its contractor, Hatch Construction, which also built the Thatcher roundabout at Church Street and Third Avenue.

Safford District Engineer Bill Harmon previously told the Gila Herald that the integration of a roundabout at the intersection makes the area safer for the vehicular traffic.

“It takes an intersection with an awkward movement and sight distance and it mitigates speed and makes it more comfortable for the drivers to come together and negotiate those turns, especially for the big trucks, (so) they don’t have to make difficult, sharp turns anymore,” Harmon said.

Graham County Manager Dustin Welker said he is pleased with how the project came out and that the roundabout was recommended for the intersection.

“It was hard to find a solution while trying to keep traffic flowing through there,” Welker said. “That ‘Y’ intersection was dangerous. There were several accidents through the years through there and a roundabout was a way to faithfully and efficiently move traffic through there. The big trucks are making it through there just great. Everything flows really well. “

The roundabout is an industrial roundabout and has a secondary hub with a rolled curb designed to allow larger vehicles to go onto that if they need to. Most trucks navigate it without going on the secondary hub, but sometimes the rear of semi-trucks with trailers do so, according to Welker.

Welker thanked ADOT, Hatch, and the surrounding property owners for all their work and help in making the project a reality.

How to drive around modern roundabouts

As you enter a roundabout, remember two key points:

For multiple-lane usage, follow these guidelines depending on traffic patterns: