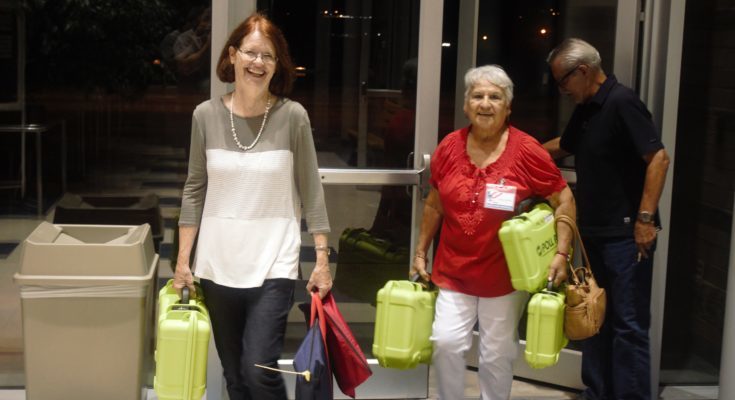 Jon Johnson File Photo/Gila Herald: Volunteers bring election ballots to the Graham County Election department at the General Services Building to be tallied from the 2020 election. This is the same process that was done in the 2022 election.

SAFFORD – In an action that took only five minutes of presentation and had no commentary from the general public, the Graham County Board of Supervisors unanimously approved the canvass of Nov. 8, 2022, General Election during its Monday morning meeting without any issues.

This could be said for the entire elections process in Graham County, at least according to County Manager Dustin Welker who presented the findings to the board in place of Elections Director Hannah Duderstadt, who was not at the meeting due to an illness.

Welker praised both Duderstadt’s Elections Department and Wendy John’s Records Department for their work handling the election and said the number of tenured workers and volunteers in Graham County has made the process seamless without any incident.

“Election Day went very smoothly,” Welker said. “We really didn’t have any hiccups to speak of. No one was turned away at any time, to my knowledge. And everyone who wanted to vote was able to vote.”

In Graham County, those who vote on election day at a vote center have those ballots collected and brought to the Elections Department at the General Services Building after polls close to be tabulated. Once counted, the results are then released to the Secretary of State and the public.

“It was very successful,” Welker said. “It went smoothly and we are very happy to present this canvass to the board.”

According to Welker’s report to the board, there were 11,006 ballots cast from the county’s 19,487 registered voters for a 56.48% voter turnout. Out of the ballots cast, 3,572 were cast on election day, 6,140 were cast early and mailed or dropped off early, 1,196 were designated late-early ballots that were filled out elsewhere and then dropped off at vote centers the day of the election, and there were 98 provisional ballots.

Supervisor Danny Smith moved to accept the canvass and it was seconded by Supervisor John Howard and made unanimous by Chairman Paul David. The canvass will now go to the state for its approval.

Graham County is reliably red and voted Republican by more than a 2-1 margin in every major state race and helped Juan Ciscomani defeat Democrat Kirsten Engel for U.S. Rep. District 6, which includes Graham and Greenlee counties. However, races for Senate (Mark Kelly), governor (Katie Hobbs) Secretary of State (Adrian Fontes), and Attorney General (Kris Mayes) all went to Democrat candidates. The Attorney General race will go to an automatic recount since Mayes has 510 more votes than Republican Abraham Hamadeh as of the last report.