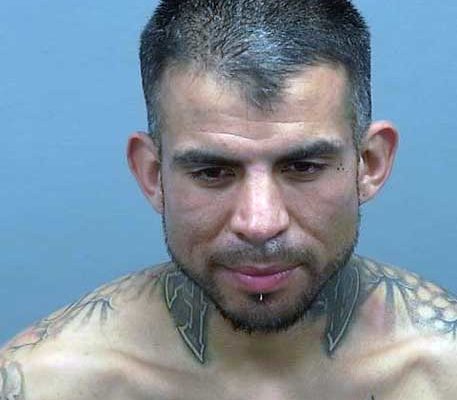 Contributed Photo/Courtesy GCSO: Robert Hernandez was booked into jail on charges of assault and disorderly conduct after allegedly striking a person who was attempting to break up a fight he was involved with.

SAFFORD – In Arizona, a person can have a concealed firearm on their person without any permit or license. In Safford many people are armed and a person may not realize that fact until they are looking at the business end of a handgun.

That’s what happened to a mutual combatant (in police terms) Sunday, April 1, at about 6:24 p.m., when he allegedly assaulted a man who attempted to break up a fight. Another man witnessed the first good Samaritan take the blow and fall down and came to his aid while brandishing a handgun, which made those involved with the fight flee the area.

Officers were originally dispatched to the Curtis Country Store at 1601 S. 1st Ave. regarding a fight involving multiple men, one subject lying wounded on the ground and another with a handgun.

Upon arrival, the officer saw the wounded man and a group of people, as well as two men running west on 16th Street. On closer inspection, he noticed one man pointing a gun at the other man, later identified as Robert Hernandez, 32.

The officer drew his duty weapon and instructed the man with the gun to lower his weapon. After the man placed his gun on the ground, Hernandez hopped over a fence and started yelling profanities at the man who previously had the gun. As Hernandez approached the man, he kicked the gun and the officer took Hernandez into custody.

It was later learned that Hernandez had been involved in a fight with another man, identified as Frankie Sandoval, as two other men watched. Sandoval and the other two men, identified as Isaac Uribe and Manuel Campos, 36, fled from the scene and were not located. According to Hernandez, the fight started because Uribe thought Hernandez was trying to become romantic with his girlfriend. Campos is out on $25,000 bond and still faces charges including aggravated assault with a deadly weapon for the shooting of Gary Hess on Dec. 18, 2017.

According to the victim’s girlfriend, she was with the victim as they were driving on 1st Avenue when they saw what they believed to be three men fighting against one man. Another bystander who recorded part of the altercation on their cell phone showed it was just Hernandez and Sandoval fighting, with the other two men in close proximity watching.

The victim pulled over and attempted to intervene by pulling Hernandez off Sandoval, and that is when Hernandez allegedly punched the good Samaritan and knocked him to the ground, where he was allegedly struck again by Hernandez and another man, according to a different witness.

A nearby resident who had also witnessed the commotion then ran to the good Samaritan’s defense while brandishing his handgun.

The victim was transported to Mt. Graham Regional Medical Center for treatment. He later spoke to an officer and said he tried to stop the fight because he thought it was three on one and it did not look fair. He was released from the hospital and said he was only trying to do what was right.

After a weapons check, the handgun was returned to the resident and he was released from the scene.

Hernandez said the victim “got into something he had no part of being in” but denied striking him, according to the police report. Hernandez was then arrested and booked into the Graham County Adult Detention Facility on charges of assault and disorderly conduct.