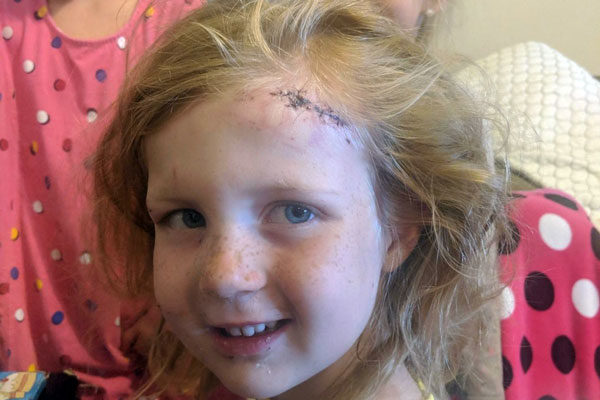 Photo Courtesy GoFundMe: This 4-year-old girl is recovering from being bitten by a likely rabid bobcat on Mount Graham. A GoFundMe account has been set up to assist her family with medical expenses.

MOUNT GRAHAM – A GoFundMe fundraiser has been set up to assist the victims of the July 28 bobcat attack on Mount Graham. The attack closed the Shannon and Snow Flat campgrounds as Arizona Game & Fish representatives attempt to capture what they believe to be a rabid bobcat.

The incident took place at the Shannon Campground around 7 p.m. when the bobcat attacked a 4-year-old girl. The girl’s father, two uncles, and a teenage female family member came to her rescue as the girl “received multiple bites and scratches on her body and head”, according to the fundraiser page. The injured girl and her father reside in Pima, while other injured family members were visiting.

The 4-year-old girl was treated at Mt. Graham Regional Medical Center for her injuries and for possible rabies exposure, but other family members had to go to other hospitals because there was not enough vaccine on hand.

According to Arizona Game & Fish Spokesperson Mark Hart, once the symptoms of rabies are apparent it is almost always fatal, so it is imperative to receive the vaccine prior to showing symptoms.

All 15 family members who were at the campsite ended up traveling to various hospitals to receive vaccinations, which require several shots over a span of two weeks. The costs for the vaccinations, hospital trips and more have been estimated at between $30,000 to $50,000, according to the fundraiser. Click here to donate to assist the family if you can.

Hart said while mountain lions have been known to attack humans and especially children, it is extremely unusual behavior for a bobcat to do so and, in this case, the bobcat was actually smaller than the 4-year-old initial victim.

“The behavior is extreme by any reasonable standard,” said Arizona Game & Fish Spokesman Mark Hart. “This isn’t someone just coming across a bobcat and then quickly getting bit and then the bobcat running off; this is sustained attacks on human beings.”

The Arizona Game & Fish advised the bobcat will be destroyed if located.