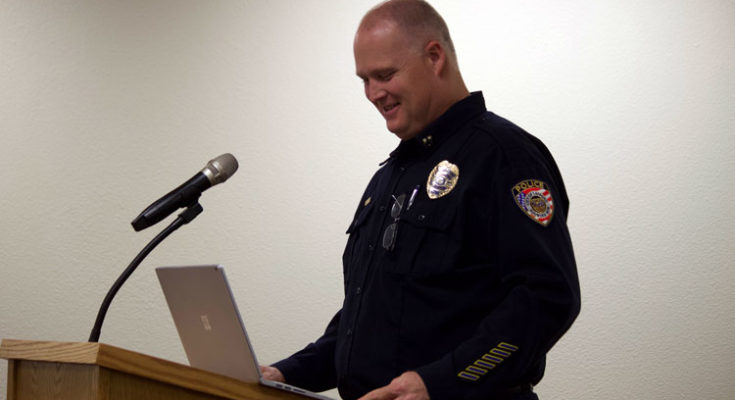 Jon Johnson File Photo: Then Safford Interim Police Chief Glen Orr smiles as he previously addresses the Safford City Council. Orr has even more reason to smile now as the council has made it official and he can drop the “interim” from his title.

SAFFORD – The Safford City Council proudly announces the promotion of Glen Orr to the position of Police Chief. Chief Orr was selected for promotion after a national recruitment, which started in February following the announcement of Chief Brugman retirement.

Glen has worked for the Safford Police Department for 12 years. He started as a patrol officer in October 2007, before having the opportunity to promote to detective, later promoting to the position of detective sergeant. Later Glen promoted to the position of police captain. With this promotion to police chief, Glen will now have the opportunity to have served at every level within the Safford Police Department.

Glen was raised in the Gila Valley. Glen and his wife have three children who were raised in the Gila Valley. He graduated from Thatcher High School, was a pride of Safford award recipient in 1997, an Eagle Scout, later a Scout Master, and coached many youth baseball and basketball teams. Glen graduated from the FBI National Academy and was a recipient of two Chiefs Awards for his investigation work on major cases. Glen also obtained his Bachelor’s Degree in Administration of Justice and a Masters of Public Administration. Currently, Glen is a part-time adjunct professor at EAC.

With his vast experience and education, we are confident in Glen’s abilities to lead the department into the future. Not only does Glen have tremendous loyalty to his work in law enforcement but his love and commitment to the citizens of Safford and the entire Gila Valley.