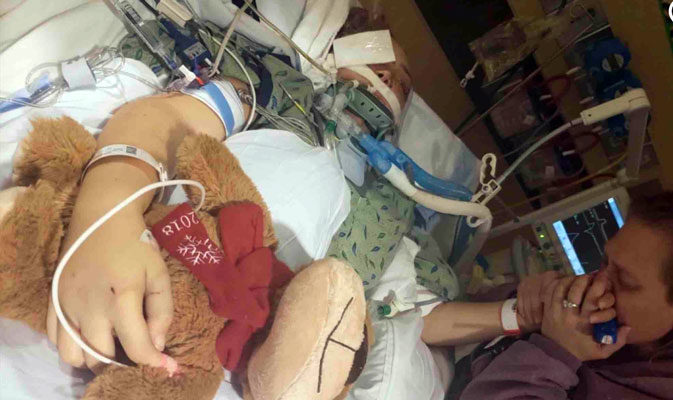 GRAHAM COUNTY – A joyous celebration turned into a horrific tragedy in mere seconds Saturday night, when a group of juveniles celebrating a birthday party was involved in a severe automobile collision.

A mother who had just left her smiling, precious daughter at a friend’s house in Pima, now sits bedside in the pediatric intensive care unit of Banner – University Medical Center Tucson, hoping to see her daughter wake up and praying that she might breathe on her own.

Hannah Blake, 15, was at a birthday party in Pima when she left with friends to go to another house in Safford. On the way there, Hannah was sitting in the rear of the vehicle when the driver overcorrected and ended up going into the oncoming lane, where another juvenile was traveling home from work in the opposite lane of travel. The two vehicles collided and the area where Hannah was seated took the brunt of the impact and Hannah was severely injured.

First responders were dispatched to the scene in the 6500 block of W. Safford/Bryce Road at about 10: 25 p.m. and performed a tracheotomy on Hannah because both of her lungs had collapsed and they were not able to intubate her due to her facial injuries. She was then airlifted from the scene to UMC and has remained in critical condition since that night.

According to a press release from the Graham County Sheriff’s Office, the eastbound car in which Hannah and three other juveniles ages 15-17 were in was eastbound when it entered the westbound lane. None of the occupants were wearing seatbelts.  The juvenile in the westbound vehicle was wearing her seatbelt and did not have any major injuries, according to the release.

All four occupants of the vehicle Hannah was in received medical treatment, with the driver and other passengers being initially treated at Mount Graham Regional Medical Center. According to witnesses at MGRMC, two of those patients were also airlifted to UMC, including a juvenile male who had to be cut out of the car.

The Arizona Department of Public Safety is assisting with diagraming the incident scene.

In addition to the multiple fractures to her face, Hannah had a traumatic brain injury and suffered from oxygen deprivation for about 30 minutes. The swelling of her brain forced trauma surgeons to perform a craniotomy, (the removal of part of her skull) and she was placed into a medically-induced coma to keep the swelling minimal. As of Friday morning, Hannah’s parents are still waiting for the medicine that put her into the coma to wear off to see if she will be able to breathe on her own and to what extent her brain was damaged. CT scans showed Hannah suffered several stokes in the first 24 hours she was at the hospital.

In a message to the Gila Herald, Hannah’s parents said they are bedside, waiting to see if their little girl will wake.

“As for now, we wait,” stated the message. “We have no way to tell the extent of her brain injury until the coma meds are out of her system and her cognitive functions can be measured.

Her PICU team here at UMC is amazing and has taken incredible care of my daughter. I am in awe of their abilities and forever grateful for the level of love and care they have shown both for her and us during this heart-wrenching journey.”

With the family dealing with the tragedy by staying by Hannah’s bedside, the family, which also has four other children, is in need of community support. To that end, a GoFundMe page has been started to help the family to financially deal with the crisis. Those who can help can visit the page here to read updates on Hannah’s story and make a donation.