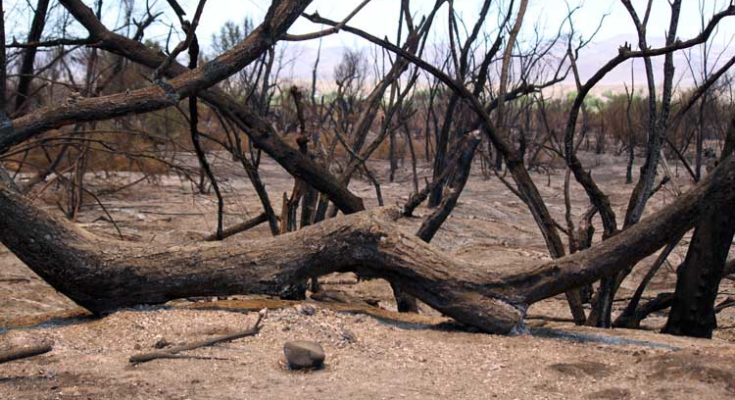 Jon Johnson Photo/Gila Herald: The wildland fire along the Gila River has been contained at 81 acres with no further expected growth.

SAFFORD – A wildland fire that has burned brush and trees along the Gila River since Monday night has been contained at 81 acres.

Firefighters were dispatched at about 9:15 p.m. to the fire, which appeared to start along the riverbed about a quarter-mile west of 20th Avenue. With no natural causes evident, the prevailing belief is that the fire was most likely human-caused. There was a homeless camp in the area where the fire started, but no official cause has been found. There have been no reported injuries.

After the fire flared up on the responding volunteer Safford Fire Department, additional resources were called in Tuesday night and, eventually, the Bureau of Land Management, U.S. Forest Service, and State Land Resources all fought to contain the fire. Utility poles that were in the path of the fire were de-energized, but the blaze was thwarted – with some assistance from changing winds – and the poles were not affected. The fire, which was on a collision course with the Safford Wastewater Treatment Facility and 8th Avenue Bridge, was stopped short of hitting those pieces of infrastructure and halted at about 14th Avenue, according to Safford Fire Chief Clark Bingham.

On Tuesday, the BLM and others tightened up control lines and performed backburning operations that sent up plumes of additional black smoke. While it may have seemed the fire was getting worse, it was actually being contained by burning up the fuel and stopping it from spreading.

Crews found fire breaks, including a drainage area and roads, as well as a cotton field that also served as a natural fire break due to how the farmer had set up his field. No damage to any cotton field or any other infrastructure was reported.

At the height of the battle, there were two hand crews from Fort Grant Prison on the scene, along with two BLM engines, two Forest Service engines, a State Land engine and the Safford Fire Department. The SFD were on scene until about 1 a.m. Tuesday morning and were then released.

Others battling were released last night and the rest would likely be released after today. While no more growth is expected, some fuel inside the containment lines may produce more smoke and fire today, according to BLM Fire Management Officer Damon McRae.

“It’s looking real good,” McRae said. “We turned some folks away last night and by the end of the day, we are expected to be able to release everybody else. We’re not mopping up the interior, so there’s potentially some more smoke here and there but the lines are looking pretty good. We’re not looking for any more growth, but there might be some interior pockets still burning.”

McRae said most of the work being done today will consist of repairing roads.