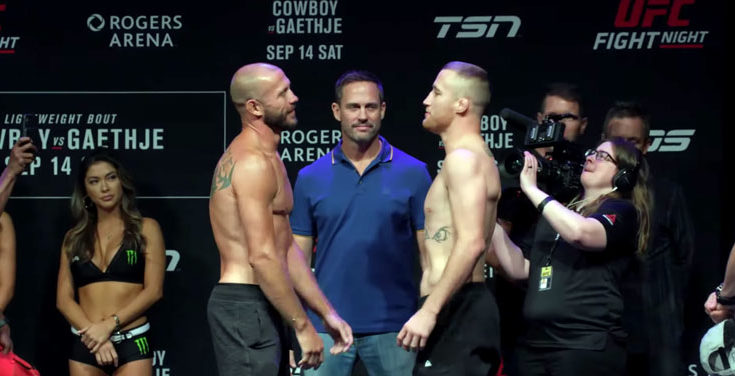 Donald Cerrone, left, and Justin Gaethje exchange words at the ceremonial weigh-in, Friday. Both men officially weighed in at 155.5 pounds for their fight Saturday night.

VANCOUVER, CANADA – Safford native Justin “The Highlight” Gaethje (20-2, ranked No. 5) will look to advance toward his goal of a Lightweight championship bout by taking out perennial contender Donald “Cowboy” Cerrone at UFC Fight Night 158 at Rogers Arena in Vancouver, British Columbia, Canada, on Saturday night.

The fight will be broadcast on ESPN+, which is a separate service from ESPN that one has to subscribe. Rates to subscribe are $5 per month or $50 for the year. Preliminary rounds begin at 2 p.m. Pacific Time, with the main card scheduled to begin at 5 p.m.

Gaethje has been awarded six post-fight bonuses in his five appearances in the UFC (3-2) and this fight likely will not be an exception as Cerrone has earned five bonuses in his last four outings, including a TKO loss to ex-interim lightweight titleholder Tony Ferguson on June 8 in which Cerrone’s cut right eye led doctors to end the match. UFC Lightweight Champion Khabib Nurmagomedov has named Ferguson as his rightful No. 1 contender.

What one can expect is that this fight will likely not go as quickly as Gaethje’s last two fights, in which he dispatched James Vick and Edson Barboza both in the first round.

After the Barboza fight, Goethe questioned why the UFC had moved Cerrone to the number 7 spot ahead of him for beating a number 15-ranked fighter. He then said he was ready to take on everyone ranked in front of him.

“There’s five or six guys in front of me (and) I want each and every one of them,” Gaethje said.

“I would not recommend this sport to my enemy, but I was born and I was bred and I was raised to do this, and I will do it until the wheels fall off.”

Currently, after Cerrone, the only other lightweight fighters in the UFC ranked higher than Gaethje include Conor McGregor (No. 3), Dustin Poirier (No. 2), and Ferguson (No. 1), all who are ranked under Lightweight Champion Nurmagomedov, who has beaten both McGregor and, most recently, Poirier.

Gaethje previously lost an epic fight to Poirier in April 2018 after being poked in the eye and having vision troubles. Poirier jumped on his opportunity in that fight and pummeled Gaethje in his head. As Gaethje went to shoot in a wrestling move, referee Herb Dean called the fight for Poirier just 33 seconds into the fourth round.

Gaethje is a former all-state wrestler for the Safford Bulldogs and gained All-American status as a wrestler for the University of Northern Colorado. Fight analysts believe he could be the best matchup for Nurmagomedov due to his wrestling background, and being crowned UFC Lightweight Champion is a feat that is an achievable goal. But first, he has to buck the Cowboy.

“If I get a title shot it will only be because I went through the hardest guys,” Gaethje said in a recent interview. “Most guys (who) get title shots don’t have to do that.”