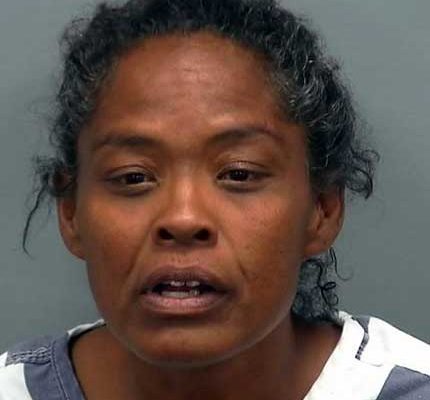 Contributed Photo/Courtesy GCSO: Evelyn was jailed for criminal trespass in the second degree after causing disruptions at various businesses Saturday.

SAFFORD – An alleged abusive panhandler spewing profanity-laced threats was given multiple chances to walk away free. However, alcohol combined with possible mental illness trumped sensibility and Evelyn Young was booked into the Graham County Adult Detention Facility once again.

Young has a long history with local law enforcement and has been jailed multiple times for trespassing, assault, and park liquor violations, to name just a few charges.

Her day’s involvements with officers on Saturday, June 2, started out in Pima when an officer was dispatched to the Dollar General store at 325 E. U.S. Highway 70 at about 9:49 a.m. regarding Young trespassing at the store. By the time an officer arrived, however, Young had left the area.

She then reappeared at Green’s Furniture at 520 W. 5th St. in Safford at about 1:25 p.m., where she began to disrupt a fundraiser for the Safford High School cheer team.

The cheer coach said Young had asked for a glass of water but then began yelling at random people. An officer located Young nearby and advised her to stay away from the fundraiser or face potential charges of assault or disorderly conduct.

Young next resurfaced at Thriftee Food & Drug at 755 S. Central Ave. at about 1:52 p.m. Customers complained to a store manager about being harassed by Young for money, so the manager called the police to remove her from the property. After a customer gave Young a couple dollars, the officer informed her that she would have to leave and if she came back she would be charged with trespassing.

At 2:08 p.m., another officer was dispatched to the Giant gas station at the intersection of 8th Avenue and 8th Street regarding Young being belligerent outside of the store and refusing to leave.

Yet another officer located Young in the area of 9th Avenue and 7th Street. At that time, Young – who had a strong odor of alcohol on her – denied being at the gas station and yelled profanity at the officers.

However, according to a Giant gas station employee, Young – who has already been trespassed from the store – entered and was told she wasn’t allowed to be there. Young then apparently was seen going from vehicle to vehicle at the gas pumps and tire service area asking for money. When told she had to leave for the third time, Young allegedly responded by cursing at the employee and calling her names and racial slurs.

After Graham County Dispatch confirmed Young had been previously formally trespassed from the gas station, Young was placed under arrest for criminal trespassing in the second degree. She continued to yell profanity at the officers, according to the report, and had to be forcibly placed in a jail restraint chair during booking while attempting to kick detention officers multiple times.