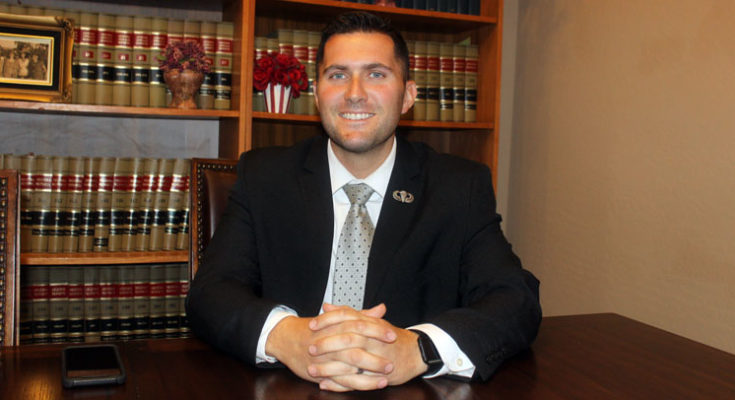 Jon Johnson File Photo/Gila Herald: Former Safford City Councilman Chris Taylor has been given assault charges in relation to the activities that occurred the night of his public opioid relapse in February.

SAFFORD – Once considered an up-and-coming Republican politician who served two tours of combat duty, overcame an opioid addiction to found a recovery center and become an addiction specialist; a volunteer firefighter who received the most votes for an incoming Safford City Councilman, Chris Taylor was on top of the world as he formally launched his bid for Congress in August 2019. Just five months later, however, that world came crashing down around him one fateful night after an injection of heroin subdued his body and soul.

Christopher Paul Taylor, 34, of Safford, has been charged with aggravated assault, assault, criminal damage, and disorderly conduct/fighting. He is scheduled to have a pretrial conference Tuesday, starting at 2 p.m.

The assault charges stem from an incident the night of  Feb. 19, when Taylor was found unresponsive in his home by his wife at about 10:15 p.m. after he injected himself with heroin. His wife called 911 for assistance and performed cardiopulmonary resuscitation (CPR), which brought Taylor back to consciousness. However, He appeared to not be coherent, and was possibly in a “hypoxic” state, according to Safford Police reports.

Taylor reportedly became combative when a paramedic with Lifeline Ambulance arrived and “shoved” his wife out of the way and closed the door. His wife advised that she did not wish to pursue charges against Taylor, however, an officer advised that in this case, the state could pursue charges of assault/domestic violence on her behalf.

According to the paramedic, Taylor’s wife was holding their infant child during the interaction. (Taylor denies she had their youngest child in her arms and said she had placed the sleeping infant on a recliner prior to breaking open the bathroom door and reviving him.)  The paramedic then ran to the door and forced it open, upon which he reported seeing Taylor and his wife engaged with each other.

The paramedic, who also serves on the Safford Police Department, advised he stepped in front of Taylor’s wife and “forced” Taylor into the wall behind the door. Taylor then allegedly swung back at the paramedic, who grabbed Taylor’s neck and tackled him to the ground, according to the report.

Once on the ground, the paramedic used leg and arm hooks to gain control of Taylor and held him down with the help of his partner until the arrival of an on-duty Safford officer, who placed Taylor in handcuffs. Taylor was then chemically sedated and taken to Mt. Graham Regional Medical Center for treatment.

Arizona Revised Statute 13-1204 advises that any assault against a paramedic engaged in his or her duties is automatically classified as an aggravated assault. While Taylor was charged with multiple counts of assault, he does not face any charges relating to his possession of heroin and drug paraphernalia due to Arizona’s Good Samaritan Law, which protects victims and others who call for assistance during an overdose.

“I’ve been here before and know the way out,” Taylor told the Gila Herald after the incident. “What I have to figure out is why I relapsed after being so solid in recovery for nearly seven years. I’m not ashamed and won’t hide from this. I want to stand tall and admit that I need help again to recover.”

After beating his addiction the first time, Taylor founded Desert Eagle Addiction Recovery, a nonprofit organization that was dedicated to helping individuals – especially fellow combat veterans – suffering from drug addiction. Taylor ran the nonprofit as executive director for four years. In 2016, Taylor ran for the Safford City Council and received the most votes of the four various candidates for the three open seats. In May 2019, he announced his candidacy for the Republican nomination for U.S. Rep. CD-1, currently held by Tom O’Halleran (D).

“My life had changed so much,” Taylor said. “I was certain all of this was way behind me. But, obviously, I was blindsided. I’m lucky to be alive. If it wasn’t for the quick actions of my amazing wife and the hero first responders I wouldn’t be alive. I want to thank them from the bottom of my heart.” (sic)

Read Taylor’s column on what happened that night in an editorial in the Gila Herald here.

After the incident, Taylor resigned from his positions on the Safford Fire Department and Safford City Council and suspended his campaign for Congress. He recently has started a podcast titled “Come This Far with Chris Taylor” and speaks on a variety of topics. Check out the podcast for Apple users here, and for Android users here.

“I have always taken responsibility for my actions. I am humbled by and continue to be accountable for my flaws and human fallibility. I stated months ago that come what may I would stand tall and accept the consequences,” Taylor wrote to the Gila Herald on Tuesday. “I trust that through due process, (the) truth will prevail and the Graham County justice system will produce an outcome based on facts. I have every confidence that this system will provide a resolution where mercy will be granted and justice will be met. My debt to society will be paid in full regardless of the outcome.”

“How mindful I am of the fact that I was fortunate enough to survive the kind of ordeal that kills nearly 70,000 American citizens every year. I am very grateful to be alive and well and that I have the opportunity to correct my mistakes, to continue to evolve, to learn and grow as a human being. Tomorrow will mark six months of continuous sobriety. It’s nothing compared to the six years I had before my relapse, but it is without a doubt more solid and meaningful. I have never been more healthy mentally and emotionally than I am right now. The refiner’s fire is necessary to shape and mold us into stronger individuals. This whole ordeal has been the greatest blessing.”

“My family is amazing. Through this experience, we have grown stronger and closer than we ever thought possible. We are blessed beyond measure. Even the worst day of my life is infinitely better than 90% of the world’s population. I have everything to be grateful for and nothing to complain about.”

After being formally charged by the Graham County Attorney’s Office on July 9, pretrial supervision screening was recommended on July 22, and an order reassigning the judge overseeing the case was approved Aug. 3. Taylor is now being adjudicated by Maricopa County Superior Court Judge Ronee Korbin Steiner and he is scheduled to have a “meet-and-greet” pretrial conference with the judge, prosecutor Scott Adams, and his attorney, Channen Day, on Tuesday, starting at 2 p.m. Any possible plea agreement could be discussed at the hearing.