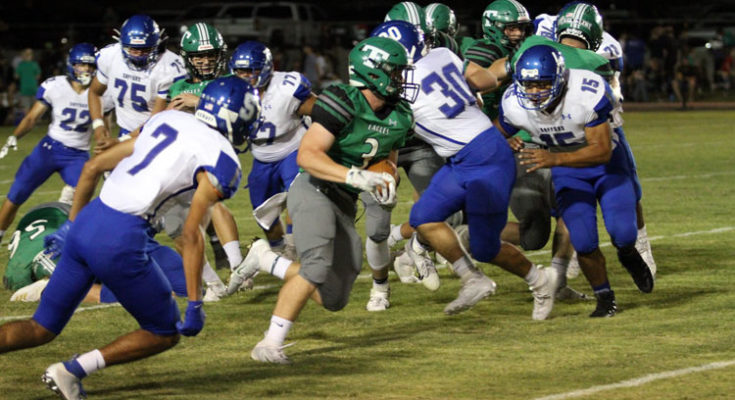 Photo By Stan Bonifacio: Thatcher running back Gavin Bryce scrambles for yardage against Safford in last year’s rivalry game. This year, both teams will be in the same region and the rivalry game will be the second to last regular game of the season.

Safford welcomes Thatcher into 3A South

PHOENIX – With the lawsuit regarding moving schools up a division dismissed, the Arizona Interscholastic Association has released the regions for football for the 2020 season and some schedules.

Safford (8-3) was the top of the pack last year going unbeaten in the region and was the regular-season champs. The Bulldogs remain in the 3A South, followed by Sabino (8-4), Pusch Ridge (5-5), and Sahuarita (5-5). Joining the group this year will be Thatcher (8-5 in 2A last year). After winning three state titles in the last four years, the Thatcher Eagles have been moved up to 3A. The Eagles beat the Bulldogs last year, 14-0.

Schedules have yet to be released. This post will update when they are.