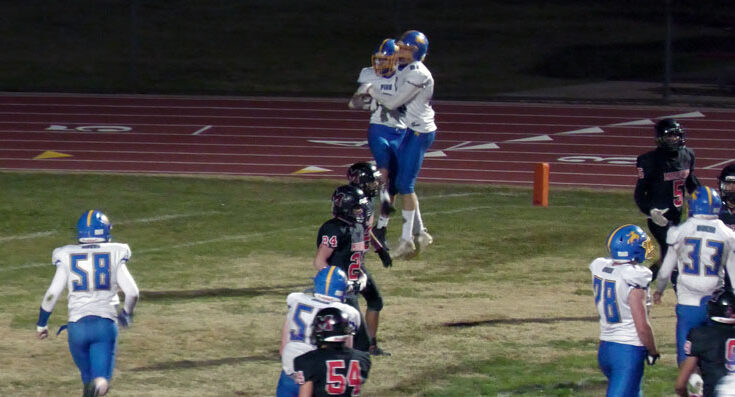 Jon Johnson Photo/Gila Herald: Jaxon John and Grant Ashby celebrate in the end zone after John caught the game-winning touchdown in the waning seconds of a 21-20 victory over Morenci to propel Pima to the overall number 1 seed in the 2A State Playoffs.

After being ranked 1 and 2 throughout the season, Pima and Morenci flip-flopped after the game with Morenci securing the overall number 2 seed. That means if the two teams are to face each other again, it will be for the 2A State Championship.

If Pima advances, it will host the next playoff game on Friday, Nov. 11, versus either No. 8 Camp Verde or No. 9 San Tan Charter.

If Morenci advances, it will host the next round as well on Friday, Nov. 11, versus either No. 7 Tonopah Valley or No. 10 Heritage.

It came as no surprise when the brackets were announced that Thatcher was the overall number 1 seed in the 3A Conference.

The Eagles have been atop the rankings for the entire year, and, like with Pima and Morenci, the consensus overall number 2 team, Eastmark, lost to Thatcher in the regular season by 1 point on a last-second field goal, 31-30 on Aug. 26. This means if a repeat of one of the best 3A games of the regular season were to happen it will be for the championship.

No. 1 Thatcher (5-0 region, 10-0 overall) will begin its quest to run the table on a perfect season with a home game against No. 15 Benson (1-4 region, 3-4 conference) at John Mickelson Field at EAC on Friday, Nov. 4, starting at 7 p.m. Thatcher previously defeated Benson 51-0 on Oct. 7. (Side note to AIA: How is Benson in and Safford is not? Safford went 2-3 in the same region as Benson with No. 1 Thatcher, No. 3 Pusch Ridge, and No. 7 Sabino, and Safford defeated Benson in the regular season 42-14 on Oct. 21. Yet somehow Safford finished ranked 17 just behind Benson.

If Thatcher advances, it will host the next round as well on Friday, Nov. 11, versus either No. 8 Valley Christian or No. 9 Mohave.