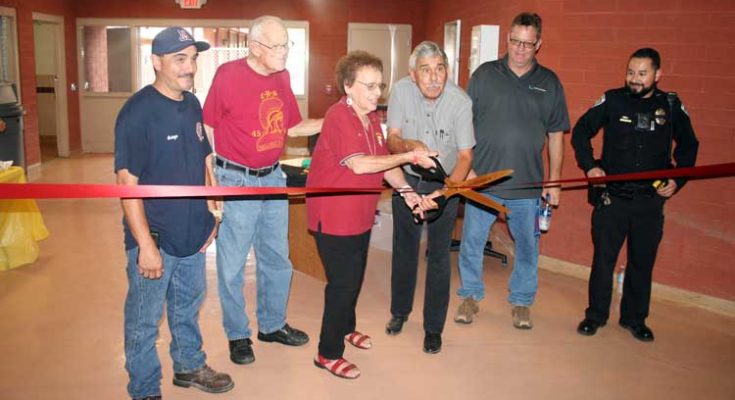 Photo By Walt Mares: A ribbon-cutting ceremony marking the official opening of the Clifton Gym was held Aug. 3. From left are Clifton Fire Chief Peter Ortega and Clifton historian Don Lunt. Performing the cutting are retired Clifton teacher Josephine Lunt and Clifton Mayor Luis Montoya. To their left are Freeport McMoran, Inc.’s Bobby Pollock and Clifton Police Chief Omar Negrete. Josephine Lunt taught at Clifton Schools for many years and Mayor Montoya is a former Clifton Schools superintendent. Morenci Community Services was responsible for reopening the gym and making it available for public use. The facility is located on the former Clifton school’s campus.

Kia Gaethje may have said it best: “We”re one community now.” The assistant director of Morenci Community Services was referring to the grand opening of the Clifton Gym on Aug. 3.

The Clifton and Morenci communities do have much in common. All school-aged children, except maybe for a very few, attend school in Morenci. There are Clifton kids who are involved in Morenci junior high and high school athletics and other organized activities.

Also, part of unincorporated Morenci lies within the Clifton town limits. Clifton is an incorporated municipality.

The keen athletic and other rivalries between Clifton’s and Morenci’s high schools are long gone. The Clifton Gym was formerly known as the multi-purpose room for use by elementary and junior high students. Separate from it, and located in another building, was the high school gymnasium. That gym remains intact but has not seen any use since the Clifton School Board disbanded the school district beginning in 2014-15.

A loud cheer, actually more of a roar, went up from the crowd as long-time Clifton teacher Josephine Lunt and Clifton Mayor Luis Montoya used a very large pair of scissors to cut the 10-foot-long red ribbon. Lunt and Montoya are both retirees. Lunt taught at Clifton for decades and she was particularly well-known for involving her students in music. Montoya was long-time superintendent of Clifton Schools.

The Clifton Gym was built around 1996.  Then it was mothballed for about four years when the Clifton District was disbanded

Today, it is full of life and is now known officially as the Clifton Gym. That was manifested by the Aug. 3 ribbon-cutting ceremony.  There were many, about 150 youngsters and parents, who witnessed the ribbon cutting.

Immediately following the ceremony the fun began. Some youths played basketball. Youths and adults had fun with other activities ranging from ping pong to hula hoops.

The Clifton Fire Dept. made the grand opening all the more special as firefighters cooked up free hot dogs for everyone. The aroma of the food that was being cooked outdoors near a gym entrance immediately drew the attention of those entering the gym Clifton Fire Chief Peter Ortega said the crew prepared about 230 hot dogs.

Gaethje’s comment of being “one community now”  does not mean that either community has lost or is losing its identity. It is a matter of Morenci Community Services reaching out to provide Clifton a means to have top-notch recreation which it has little of now. A splash pad on Eastside provides some recreation during the warmer months. There used to be a municipal swimming pool but it was closed and demolished about 12 years ago.

The gym in Clifton is being operated under the auspices of the Morenci Community Services, which has a well-rounded menu of activities at the Morenci Fitness Center. That facility has two swimming pools, state-of-the-art weight lifting-body strengthening machines, along with hosting children’s and family activities.

The services are part of Freeport McMoRan, Inc.’s community improvement efforts. FMI owns a majority of and operates the Morenci copper mine. It is the largest open pit copper mine in North America.

The Morenci Recreation Center, and now the Clifton Gym, provide FMI employees, their families, and the general public an opportunity to lead and enjoy more healthy lifestyles. The opening of the Clifton Gym page undoubtedly marks a most positive page in the history of copper mining and community well-being for Clifton-Morenci.