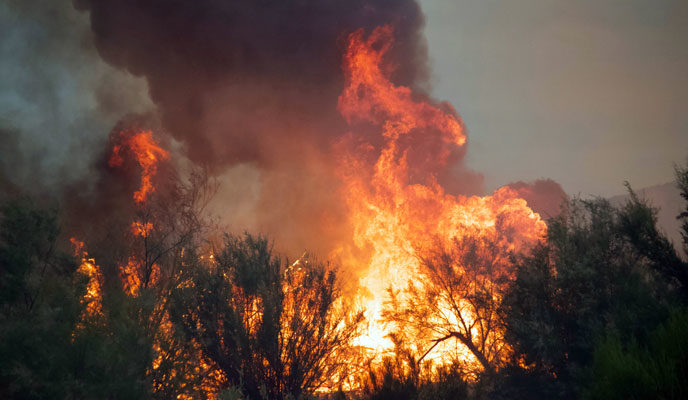 Jon Johnson File Photo/Gila Herald: The fire season started late in the Gila Valley but it has ramped up the past two weeks with multiple wildfires and structure fires.

GRAHAM COUNTY – The fire season hit the Gila Valley late but it has hit it hard with multiple fires being reported and fought in each of the last two weeks.

At least two families have lost their primary residences (one caused by a candle and one by burning weeds) and there have been multiple brush fires throughout the Safford, Thatcher, and Pima fire districts.

Most recently, the Pima Fire Department responded to both a structure fire and a brush fire.

On May 30, Pima Fire was dispatched at about 10:42 a.m. to a large brush fire in the desert area west of Safford/Bryce Road near the intersection with Marshall Lane.

Pima Fire arrived and began to extinguish the fire but advised that the area was actually in the Thatcher Fire District.

Thatcher Fire arrived shortly thereafter, and both departments extinguished the blaze. The cause of the fire was unknown.

The following day, Pima Fire was dispatched at about 6:09 p.m. to a residence on N. Robin Avenue, which is east of Cluff Ranch Road.

According to a Graham County Sheriff’s Office report, a resident was clearing brush away from a trailer and burning it when the wind picked up and the burning weeds caught the trailer on fire.

A responding deputy asked Pima Fire Chief Scott Howell if he wanted to have a citation issued to the homeowner for illegal burning, but Howell said since the fire was an accident he didn’t feel the resident needed to be cited, according to the Sheriff’s Office report.