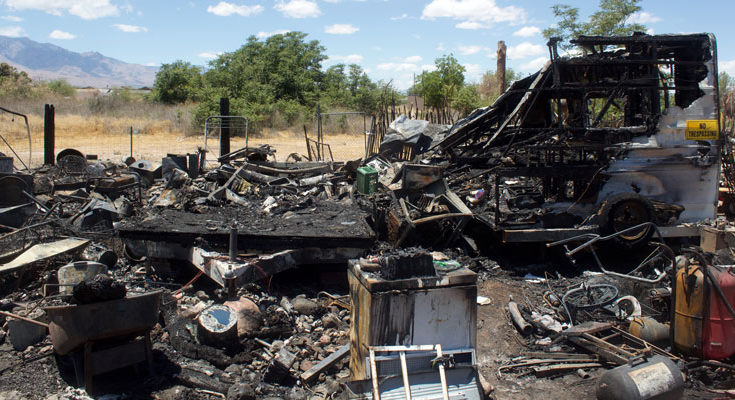 GRAHAM COUNTY – Gene Lane and Joyce Riley have been making a home for themselves on a lot Lane purchased off the northern leg of Hollywood Road just west of the eastern bend toward Montierth. The engaged couple began cleaning up the lot, started a garden, a compost area, and were working on getting water to the property when they lost their home and most worldly possessions in just a matter of minutes early Wednesday morning.

A fire, started by a burning three-wick candle, swept through the couple’s two joined trailers, with Riley barely able to make it out with Lane’s assistance.

“It was nice,” Riley said. “Everything was starting to look really good and come together.”

Riley had lit the candle before falling asleep only to wake up with flames engulfed all around her.

With the help of Lane, Riley did make it through the door with only an injury to her right fingers to show for her harrowing experience. Her pet puppy Chihuahua wasn’t as fortunate, however, and perished in the blaze.

After getting Riley safely outside, Lane got another dog out of harm’s way just before his newly filled propane tank exploded, spreading the fire to consume more of his property and melting the rear of a nearby car.

First responders were dispatched to the scene at about 1:22 a.m. and managed to stop the fire from spreading from the two trailers and property to nearby automobiles. However, the residences were a total loss.

Lane believed his longtime service animal Chihuahua “Penny” had also died in the fire, but, miraculously, the following day his companion emerged from the burnt debris underneath his trailer and was taken to Desert Cross Veterinary Hospital. Also found in the debris was a depiction of Jesus Christ on the Cross that appeared unburnt but had a piece of glass melted to it.

“It’s such a miracle she made it,” Riley said. “They are our family, our kids. It was scary. It put a brand new perspective on life for me.”

Lane said Penny suffered a few burns and was dehydrated with a fever, but he said she was in good hands and should recover.

With their home gone and most of their worldly possessions, Lane and Riley are in need of basic necessities such as food and clothing as they begin to clear up the property and start anew. Donations may be dropped off at their property off the northern section of Hollywood Road, where the Tamarack fence is located. They also attend The River Church, but the Gila Herald is not yet aware of any possibility of donations being able to be processed through the facility.

“We’ll start over,” Riley said. “We’ll do it. We’ll get this cleaned up. I’m thankful I’m alive, and I’m thankful for Penny.”