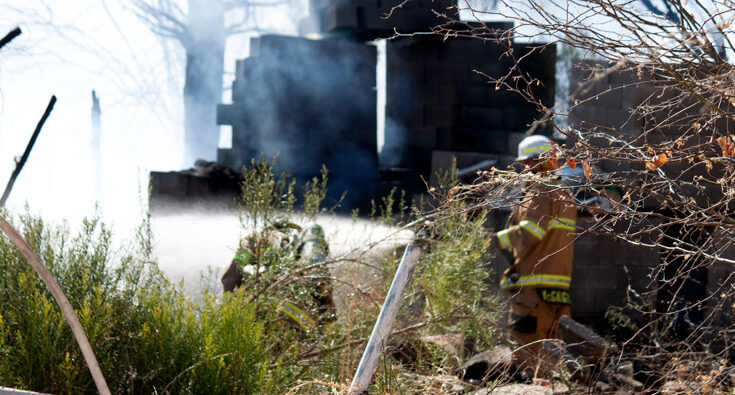 THATCHER – An alleged controlled burn that got out of hand ended up totally destroying a Thatcher family’s home early Thursday afternoon.

Fire crews from Thatcher and Safford were dispatched to the scene off First Avenue, just south of 8th Street. Other EMS services were also on scene, and officers blocked the street and provided traffic duty to assist in the firefighting efforts. There were reportedly no injuries.

According to a neighbor, the resident of the home informed him that he would be starting a controlled burn. The neighbor said he then wet down the brush in the area between his residence and where the controlled burn was to take place.

The neighbor said that around lunchtime some of the resident’s children ran over and told him their house was on fire.

“I ran over there and saw a corner of the house was just up in flames,” the neighbor said. “The entire house wasn’t up yet but a good section of it was and the wife was bringing over her youngest (child).”

By about 1:45 p.m., firefighters had gotten nearly all the flames out and fully secured the area, and kept the fire from spreading any further. However, the home, a greenhouse, and various other pieces of property were lost in the blaze.