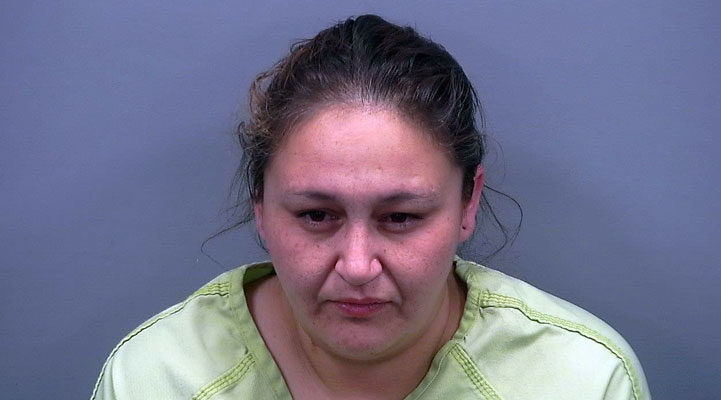 Contributed Photo/Courtesy GCSO: Cami Clark was misidentified as a shoplifter but fled from police due to a drug-related warrant and was captured.

SAFFORD – A woman received a hand laceration Dec. 26, 2018, after being caught during a foot chase with officers that occurred due to mistaken identity.

The woman was eventually jailed on an active warrant regarding possession of a dangerous drug and possession of drug paraphernalia.

Police officers were dispatched to Walmart at 755 S. 20th Ave. at about 7:30 p.m. regarding a woman who had stolen from the store.

As an officer was responding, he noticed a woman on a bicycle westbound on U.S. Highway 70 who was dressed in clothing that matched the description of the shoplifter.

The officer turned in pursuit and caught up to the bicyclist, later identified as Cami Clark, 31, just as she entered the parking lot to the new Boulevard Glass business.

Clark then rode her bike over a curb and entered an alley between Lexington Pines Mobile Home & RV Park and Walmart. As the officer followed in pursuit, Clark ditched her bike and fled over a ditch and back westbound through the Walmart rear parking lot. She then ran onto the dirt lot just to the north of Walmart, where officers caught up to her and forced her to the ground.

As Clark was being placed under arrest, an officer noticed her hand was bleeding and discovered a roughly half-inch laceration between her palm and ring finger.

Paramedics from Lifeline Ambulance responded to the area and later transported Clark to Mt. Graham Regional Medical Center to receive stitches. Previous to the transport, however, Clark was taken to the entrance of Walmart, where an associate said she was not the woman who was seen shoplifting.

While she was not implicated in the theft, Clark did have an active warrant for her arrest regarding possession of a dangerous drug and possession of drug paraphernalia. After she was medically cleared from the hospital, she was booked into the Graham County Adult Detention Facility on her warrant.