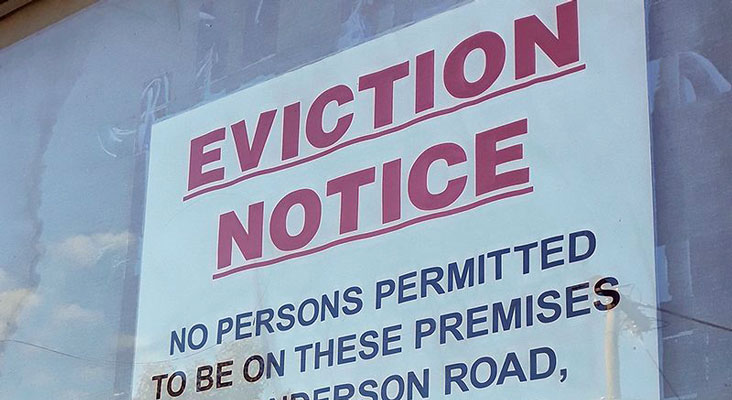 Photo By David Jackmanson/Creative Commons: The Centers for Disease Control and Prevention extended a moratorium on evictions, set to end March 31, through the end of June 8. A recent report estimates that almost 114,000 Arizona renters fear they could face eviction in the next two months.

WASHINGTON D.C. – A federal eviction moratorium that was scheduled to end Wednesday has been extended through June 30, good news for the close to 114,000 Arizona renters who think they are at risk of eviction.

It’s at least the third extension ordered by the Centers for Disease Control and Prevention, which first imposed the moratorium last year as a way to stem homelessness and, in turn, lower the risk of spreading COVID-19.

Advocates welcomed the extension at a time when nearly 170,000 Arizona renters, or about 18% of all renters in the state, are not current on their rent, according to a study by the University of Arizona.

“The CDC order is the only thing that’s been giving tenants breathing room to try to get into more stable housing,” said Andrew Sugrue, assistant director of policy and advocacy at the Arizona Center for Economic Progress.

But a group representing landlords in the state said the moratorium is unfairly forcing them to shoulder the financial burden, even though many are on the brink of possible foreclosure or bankruptcy.

“Despite not receiving rent for months, these property owners still pay mortgages, taxes, utilities, insurance, payroll and maintenance costs, all while providing a free home for many residents,” said Courtney Gilstrap LeVinus, president and CEO of the Arizona Multihousing Association, in a prepared statement Monday.

The CDC in September ordered an eviction moratorium that was set to expire at the end of 2020 but has since extended it to the end of January and then to March 31. Monday’s order extends it for another 90 days, through June 30, 2021.

The moratorium applies to any renter earning less than $99,000 a year who has lost income as a result of the pandemic and is in danger of homelessness if evicted. The renter must have sought other housing assistance and must pay what rent they can, where they can.

The order does not forgive rent – renters will have to pay eventually – and it still allows people to be evicted for other reasons, such as criminal activity or violations of building and health codes.

An ongoing report on housing insecurity by the University of Arizona’s Southwest Institute for Research on Women estimated recently that 168,854 of the 927,771 renters in the state were behind on their rent as of March 15.

The report, which is drawn from Census survey data, said that 67.5% of those renters – or 113,977 – who were behind on payments felt it was “somewhat likely” or “very likely” that they would be evicted in the next two months.

Keith Bentele, an associate researcher who worked on the report, said the extension of the eviction moratorium came just in time.

“We’re dodging a huge bullet in terms of the potential consequences of this … if the moratorium were to have expired,” Bentele said.

Sugrue pointed to an Arizona Center for Economic Progress report that said that white renters were more likely to be caught up on their rent than renters of color.

“There is a concentrated effect of housing and security on households of color, households with children, and those that had lower incomes prior to, and perhaps during the pandemic,” he said.

Included in the $1.9 trillion American Rescue Plan that Congress passed earlier this month was $21.5 billion in emergency rental assistance to landlords and tenants.

But LeVinus said that only about $100 million of the $1 billion Arizona received for rental assistance has reached renters and landlords so far. Meanwhile, there may be as much as $368 million in unpaid rent during the pandemic, she said.

“Today’s extension of the moratorium puts further pressure on property owners, many of whom already are on the brink of foreclosure or bankruptcy,” her statement said. “The eviction moratorium … is not endlessly sustainable, nor is it fair to have property owners alone shoulder the burden of a public health and economic crisis.”

But Sugrue said that eviction is the last step “in a lose-lose scenario for … landlords and Arizonans who have lost their jobs or have lost their income.” He said the extended moratorium is needed.

“This order is hopeful,” Sugrue said. “I personally believe that the state could do more but I think that this will help thousands of Arizonans who are worried about being evicted where the pandemic has caused them a loss of income.”