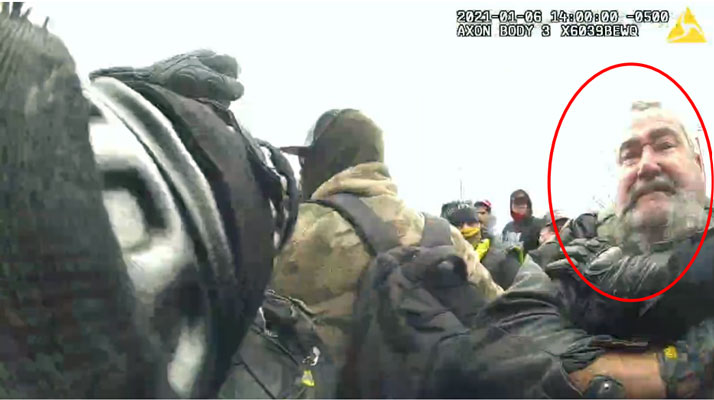 Photo Courtesy U.S. Department of Justice: Authorities say Jacob Zerkle, 50, of Bowie, was captured on body cameras while he assaulted police during the Jan. 6 Capitol riot.

BOWIE – A Bowie man was arrested by federal authorities in Tucson on Tuesday for his alleged actions during the Jan. 6, 2021, Capitol riot in Washington D.C.

Jacob Zerkle, 50, was arrested on a complaint listing seven charges, including assaulting an officer, civil disorder, and engaging in physical violence in a restricted building or grounds.

According to the complaint filed in the U.S. District Court of Washington D.C., Zerkle allegedly admitted he drove to the Capitol because he was upset with the election and skipped the speech by former President Donald J. Trump and went right to the Capitol to “protest, not to listen to speeches.”

Zerkle was shown on police officer body cameras pushing and shoving three officers during the riot and he also allegedly threw punches at an officer and grabbed an officer’s baton.

Zerkle was later identified by his passport photograph and driver’s license based on the footage of Zerkle at the Capitol. In October, an FBI agent interviewed Zerkle at his home in Bowie and Zerkle allegedly admitted to being the person in the video footage but said he was being shoved from behind and didn’t mean to assault the officers, according to the complaint.

There have been at least 11 Arizonans charged in the Jan. 6 Capitol riot, including Jacob Anthony Chansley (known as the Q-Anon Shaman) who is being housed at FCI-Safford. Chansley pleaded guilty to one count of obstructing an official proceeding and was sentenced to 41 months in prison to be followed by three years on probation.

According to the Department of Justice, 775 people have been arrested for crimes related to the Jan. 6 Capitol riot, with more than 245 people charged with assaulting or impeding law enforcement.