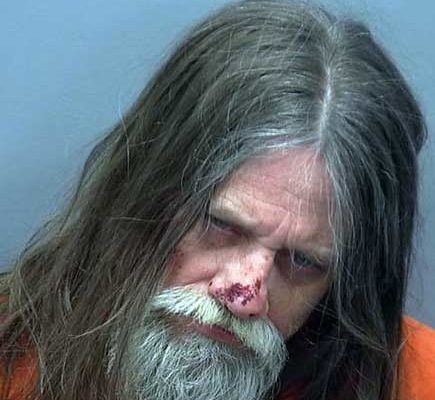 Contributed Photo/Courtesy GCSO: Thomas Tookey was booked into the Graham County Adult Detention Facility after allegedly getting into a tussle with his family and then the cops.

Man jailed for aggravated assault and other charges

SAFFORD – A man’s hatred for President Donald Trump and his territorial desire outweighing common decency for his family led to his incarceration into the Graham County Adult Detention Facility on May 14.

Thomas Tookey was arrested and booked into the jail on charges of aggravated assault, disorderly conduct, criminal damage, and assault – all under the domestic violence designation – as well as resisting arrest. According to witness statements to police, Tookey was already angered by President Trump when one of his daughters asked another daughter if she had any earbuds she could borrow. The daughter’s crime, in Tookey’s eyes apparently, was that the girl had entered his den to make the request to her sister.

Tookey’s wife told an officer that Tookey is “very territorial” about his stuff and thought his daughter was going to mess with “his stuff.” He then allegedly began yelling at the girl and throwing items around the den. The witnesses said he kicked a printer, broke some pottery and broke his other daughter’s cell phone case when he threw the phone.

When the girls’ mother attempted to defend her daughters, Tookey allegedly struck her. The first daughter then informed that she was calling the police and Tookey allegedly grabbed her by her arm and twisted it in an effort to take away her cell phone.

At one point, Tookey was walked outside and was locked out of the residence. He then turned off the electricity to the home and demanded he be let back inside. At that point, the first daughter locked herself in a bathroom and called the police.

Officers were dispatched to the residence on W. 16th Street at about 8:42 p.m. and came upon Tookey outside. Tookey allegedly told the officers that he was the victim and his daughter was beating on him. He said he had the entire incident recorded and pulled out his cell phone while acting like he was going to play the recording. Instead, however, he attempted to punch an officer, who then took Tookey to the ground. Tookey continued to resist being taken into custody, and multiple officers had to subdue him and place him into handcuffs as he berated them with vulgarity, according to a Safford Police report.

Tookey then claimed he was injured by the officers and was taken to Mt. Graham Regional Medical Center by paramedics with Lifeline Ambulance. Officers attempted to get a statement from Tookey at the hospital, but he remained belligerent to them and created a disturbance, so the officers didn’t press the issue.

Tookey was treated and released from the hospital into police custody. Still, he continued to be comabative and spat on the officer’s patrol vehicle while being loaded for the trip to the jail and then began to argue with correctional officers at the jail as he was being booked on his charges.