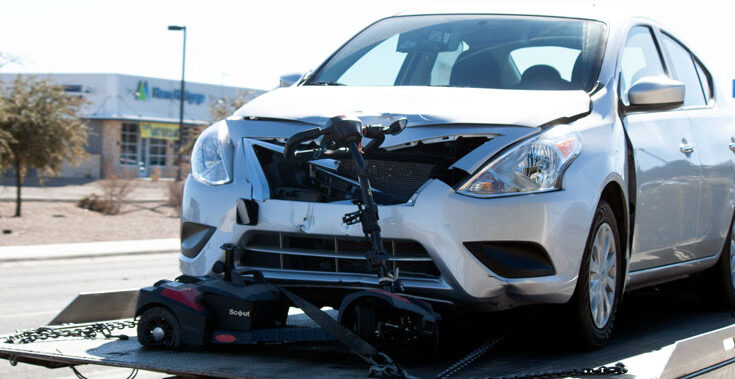 Jon Johnson Photo/Gila Herald: A man on a motorized scooter was killed Wednesday morning after being struck by a vehicle when he attempted to cross 20th Avenue from the Walmart parking lot.

SAFFORD – A fatal collision between a motorized scooter and a vehicle closed down 20th Avenue between Highway 70 and 8th Street from about 10:10 a.m. on Wednesday to just after 12 p.m.

According to Safford Police Department Captain Brian Avila, evidence at the scene suggests a man on a motorized scooter exited the Walmart parking lot’s southern entry off 20th Avenue and headed westbound when he was struck by a northbound vehicle driven by an elderly female.

The man, later identified as Gerald Pace, 89, of Thatcher, was thrown from the scooter onto the roadway, and the woman continued northbound, dragging the scooter in the front of her vehicle for roughly a quarter of a mile into the Gila Valley Plaza shopping center parking lot at the intersection of 20th Avenue and U.S. Highway 70.

Pace was transported to the Mt. Graham Regional Medical Center, where he was pronounced deceased.

Officers cordoned off 20th Avenue from U.S. Highway 70 to 8th Street for roughly two hours to thoroughly document its investigation and get precise measurements of the incident’s totality. A street sweeper was initiated at about noon to do a final clean up prior to reopening the roadway.

The incident is currently under investigation, however, Captain Avila advised there didn’t seem to be any indication of impairment on the part of the driver of the vehicle.

An earlier version of this article stated Pace died at the scene. It has been updated to include his identification and state he died at the hospital.