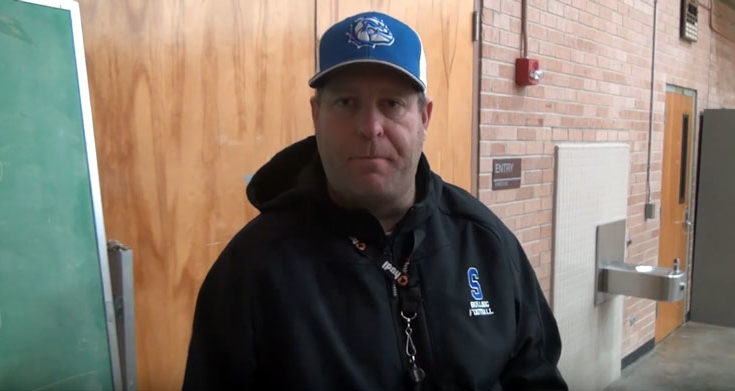 SAFFORD – After leading Safford to an 8-3 record and a regional championship last year, Eric Hjalmarson hopes to replicate that success with another team down the highway.

Pending school board approval, Hjalmarson will become the head football coach for the Willcox Cowboys, replacing former coach Alonzo Highsmith, who resigned in February. Hjalmarson will also take over Highsmith’s classroom duties and will teach physical education and weights classes.

Hjalmarson resigned from his position at Safford in February as well and finished his tenure with a 15-8 record and as the 2019 3A South Region Coach of the Year.

Hjalmarson’s two-year tenure at Safford included leading the Bulldogs to a regional championship last year before bowing out in the first round of the playoffs against Sabino, who they had just beat the week prior to secure the region.

Hjalmarson’s team last year also had some controversy after an incident in June during the team’s camp in the White Mountains gained the press’ attention.

During the incident, several players held down a fellow player while repeatedly punching him in his chest, back, and abdomen areas while laughing after the player allegedly broke a players’ rule that anyone who passed gas in the tent would be removed and only allowed back in if they submitted to the lashing. Coaches were not present during the incident and were reportedly not privy to the situation. Hjalmarson served a one-game suspension at the start of the season for the incident, which was investigated by the Pinetop-Lakeside Police Department, but which yielded no charges against those involved. Safford has not announced a replacement for Hjalmarson.

The Eagles will attempt to soar under new head coach Daniel Jones, who previously was an assistant coach at Mesa Desert Ridge High School.

Jones will replace Ramon Morales as head coach, who, in turn, had stepped up for the Thatcher football program in 2018 after back-to-back state championship head coach Sean Hinton was removed from the team July 2, 2018, due to a substance abuse disorder.

Morales went 14-0 in 2018 capped with the state championship and 8-5 in 2019, succumbing in the state semifinals to eventual state runner-up Phoenix Christian, 28-0. He was previously named the 2018 Conference and Region Coach of the Year.

At the start of the 2019 season, Morales informed Thatcher Athletic Director James Hicklin that it would be his last season as captain of the ship. According to a previous social media post, Morales plans on remaining on the staff as a running back and linebacker position coach.

Jones reportedly said he expects Thatcher to maintain its run-first type of offense and utilize clock management. After dominating the 2A class with three championships in the last four years, Jones will hope to replicate that success in the 3A as Thatcher moves to a higher division on par with its rival, Safford.

In Pima, longtime journeyman coach Jim Hughes has been reportedly lured out of retirement to become the Roughriders’ head coach once again.

Longtime football fan Jalen James, of Pima, advised that Hughes has been successful wherever he went.

Bryant is one of the greatest 8-man football coaches in Arizona history with nine state championships, including two in Pima during his first tenure from 2003-2008, in which he went 41-6.