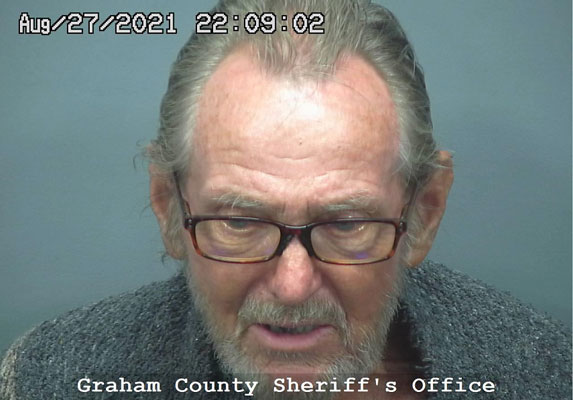 Contributed Photo/Courtesy GCSO: Ron Anderson, 86, was arrested on charges of aggravated assault, disorderly conduct with a firearm, trespassing in the first degree, and criminal damage.

GRAHAM COUNTY – An 86-year-old man was arrested and booked into the Graham County Adult Detention Facility on Friday, Aug. 27, after allegedly striking a man with a hammer, cutting a barbed wire fence, and firing a round into the ground.

Roy Anderson, 86, was arrested on charges of aggravated assault, disorderly conduct with a firearm, trespassing in the first degree, and criminal damage.

According to a victim, there has been an ongoing problem with Anderson trespassing on his property. On Friday, the victim saw Anderson go through the gate so he drove his front-end loader tractor and parked it in front of the gate on the roadway on his property.

The victim said that an argument then ensued, and Anderson began cutting the barbed-wire fence using the hammer to break it. The victim advised he got back in his tractor to move it out of the way but that Anderson climbed up and began striking him in his leg with the hammer. The victim showed a deputy his left shin that was injured in several areas.

At that point, the victim said he stepped on Anderson’s hand, took the hammer away from him and walked back to his house, and called 911. He said he was on his porch awaiting the police when he heard a gunshot.

The deputy was also shown a video taken by the victim showing Anderson throwing a rock at him and damaging the fence.

When deputies and officers with the Safford Police Department initially arrived, Anderson was using a shovel to move some rocks by the cut fence. All four strands of barbed wire had been cut on both sides and the fencing was pulled back away from the gate.

Anderson allegedly told the investigator that he had gone on the property to go rock hunting and began to cut the fence when the victim blocked his exit with the tractor. He said he climbed on the tractor and utilized the hammer to do so but denied striking the victim.

Anderson also allegedly admitted to shooting a .22 caliber round into the ground. A small handgun was found in his truck with three bullets in the magazine and one in the chamber. A spent round casing was also located near the truck. The owner of the fence was contacted and advised the cost to repair would be around $300 to $500.

During the arrest, Anderson was found to have a laceration on his hand that required stitches. After treatment at the scene by paramedics, Anderson was taken to the Mt. Graham Regional Medical Center. Upon his release, he was booked into jail on the above-mentioned charges.