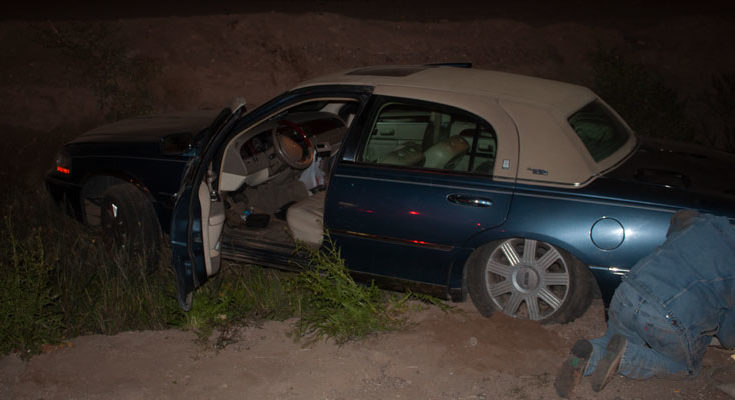 Jon Johnson Photo/Gila Herald: A Nuttall’s Towing employee puts a strap to a car that crashed into a ditch off U.S. Highway 70 on Thursday night. Officers believe the elderly driver suffered from some sort of medical condition which facilitated the crash.

SAFFORD – An elderly man was transported by paramedics to Mount Graham Regional Medical Center (MGRMC) on Thursday evening after he crashed his four-door sedan into a ditch off the north side of U.S. Highway 70.

Officers were dispatched to the scene just west of the intersection with 20th Avenue at about 5:48 p.m. According to officers at the scene, the victim appeared to have been northbound on 20th Avenue when he took a left westbound onto U.S. Highway 70 but failed to completely turn onto the highway and ended up in a ditch north of the road.

First responders reported that the driver indicated he felt paralyzed and they surmised that the man suffered some type of medical condition, such as a stroke, which caused him to lose control of his vehicle.

Officers from the Safford Police Department closed off the far north westbound lane to allow Nuttall’s Towing to safely remove the vehicle from the ditch, which created some slowing at the intersection during the recovery.

The injured man was treated at the scene by paramedics from Lifeline Ambulance, which then transported him to MGRMC.