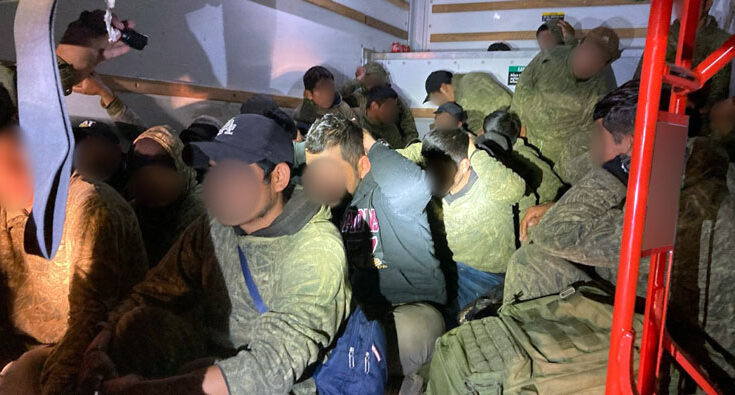 “We have a population that is not reproducing on its own with the same level that it used to.  The only way we’re going to have a great future in America is if we welcome and embrace immigrants, the Dreamers and all of them, because our ultimate goal is to help the Dreamers, but to get a path to citizenship for all 11 million or however many undocumented there are here.” – New York Post, Nov. 20, 2022.

Chuck’s admittance he has no idea how many illegal immigrants are currently in the country, but he’s sure we need more, is reflective of the Biden Administration’s idiotic approach to border security.

However, Chuck’s a little shy on the actual number of folks who have unlawfully paraded across our southern boundary.

It is estimated the number is closer to 17 million, over twice the population of Arizona.  Heck, about four million have come across since Joe’s been in office.  Every day, thousands more enter, heading to every zip code in the country.

Except, Martha’s Vineyard, Mass.  A couple of months ago, a measly 49 migrants from Florida were flown onto the island of the rich and famous, and the residents immediately seized up.  Breathing difficulties and heart palpitations caused many to seek medical attention.  Just the sight of a bunch of unsupervised, brown-skinned foreigners, instantly sent the city council into emergency session.  Something had to be done before the rocky little isle succumbed to a watery grave.

The solution?  “Get these friggin’ uninvited, poverty-stricken, nonEnglish speaking s.o.b’s. outta here” – or words to that effect.

In about 24 hours the virus was gone, bussed to a distant military base, never to be seen again.

Chuck and fellow Democrats, gaze south across the landscape and see a flood of future welfare recipients and progressive voters, while Republican election strategists debate among themselves the most expedient approach to preventing Trump from returning to Washington.

Both interests are harmonious with each other.

The border is important, but keeping Trump out of the Oval Office is more important, so chirps RINO Republican Liz Cheney and a few of her like-minded acolytes.

Schumer’s public announcement put an exclamation point on a barely disguised ambition – socialist-wokeness has become the Democrats’ new rallying cry, and everyone is welcome to join.

You’re from Nicaragua, Nigeria, or Nepal?  Doesn’t matter.  If you can walk, crawl, swim or fly, come on in and enjoy the good times with the rest of the huddled masses.

In a perpetual state of brain bewilderment, Chuck’s figured the best way to replenish a declining population is to simply open the floodgates.  Apparently, a steady flow of undocumented, unvaccinated, uneducated, and unskilled newcomers is the logical solution.

Brilliant!  Give the guy a Nobel Prize for the most ridiculous and incomprehensible recommendation ever devised from the mind of a career political wacko.  Chuck’s been honing his “go-along-to-get-along” techniques since squatting in a government office nearly five decades ago.

Who else could imagine weakening the social, legal, and economic fabric of the country is actually a viable response to a dwindling birth rate?

In reality, if Chuck is looking to import more breeding stock to increase herd size, why doesn’t he recommend we start by ceasing aborting our own unborn children?  After all, they’re already here, awaiting to become future members of society.

They don’t have to trek harsh Southwestern deserts, evade Border Patrol, and hide in the shadows.

Unfortunately, since Chuck’s mother didn’t abort him, he can reap the rewards of a United States Senator; proselyting from the steps of the Supreme Court the necessity of a woman’s reproductive rights via Roe v. Wade.

I don’t believe anyone has ever disputed a woman’s right to reproduce – it’s the right of the baby to be born that seems to be causing the ruckus.

Schumer can also use his lofty position to threaten those same Supreme Court justices that they will “reap the whirlwind” if they fail to permit the federal continuance of Roe v. Wade.

With the exception of one recently appointed female Supreme Court Justice, who doesn’t seem capable of defining what a woman is because she isn’t a “biologist,” the remaining eight judges appear competent to distinguish the qualifying characteristics.

Their vote to return the abortion issue to the individual states did not negate the Roe decision. It merely placed that responsibility into the jurisdiction of the various state legislatures and courts.

In the meantime, millions of new “birthing people” are arriving yearly, overwhelming communities in Arizona and Texas.

Of course, since the residents of Arizona and Texas are not in Chuck’s voting district, he could care less what they think or how they feel about Joe Biden’s deranged border policies.

If there were ever two perfect examples of the pressing need for term limits, Joe and Chuck would be the poster twins.