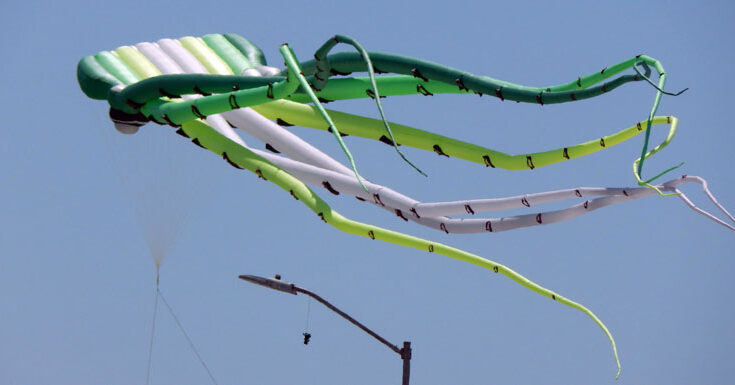 Flying low over the Playa Bonita RV Park on Sandy Beach in Puerto Penasco, Sonora, Mexico was this huge octopus/squid-looking creature.  I estimated it to be about 20 yards in length and 3 or 4 yards wide.

It hovered for several hours, disappearing in the early evening.  For some reason, afternoon winds seemed to irritate it, as it thrashed about, rapidly rising and descending upon panicky residents of the park.

Rumors reported Mexican Air Force fighter jets were scrambled but proved to be useless in subduing the beast, as were Navy sea-to-air missiles.

World Associated Conglomerated Independent (WACI) news reports United States President Joe Biden was also informed.  Since he was on his weekly vacation in Delaware, he handed the problem to Vice President Kamala Harris, who is in charge of Mexican affairs.  However, she is presently in COVID isolation and couldn’t be disturbed.

In a brief statement, she remarked she was grateful to have been “inoculated and boosted.”  Hinting, without the multiple shots and follow-up jabs, she probably would have been more susceptible to contracting the virus.

When pressed about the presence of the unusual-looking object in Mexico, she casually replied “It’s probably nothing more than some kind of Trump stunt.  Which only proves, once again, that walls don’t work.  People, or whatever, will simply fly over it.”

Some residents have suggested the greenish-colored thing appeared shortly after Spring Break festivities last month and has reappeared frequently since.

A plausible explanation.  I’ve personally witnessed some odd-looking humanoids during Spring Break, particularly the ones venturing to Rocky Point from the University of Arizona. I’m not certain if their mutant transformation takes place during the trip from Tucson, or if it is induced by too many cervezas and other liquid refreshments after arriving.

Whatever the case, its behavior was not overly intimidating once folks realized it meant no harm, but was just a friendly reminder we are not alone in the vast universe of abnormal acting beasts.

Particularly, during an election year.