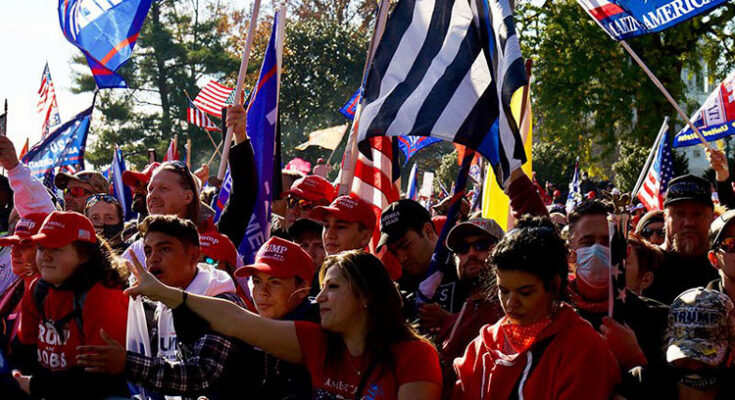 Photo By Chase Hunter/Cronkite News: Crowds of Trump supporters lean over a fence outside the Supreme Court to jeer counter-protesters who were kept on the other side of the barricade by police.

I just don’t get it. Perhaps I am a few cards short of having a full deck. But it does seem pretty simple. Or at least it should be.

Hundreds of thousands of people – fellow Americans – have died and millions are infected daily with the deadly coronavirus. It is raging through our population, affecting younger and older folks.

However, it appears that for the millions among us the travesty is at most of secondary concern.

For those people what is setting them abuzz is a lie, a fairy tale if you will. These people are in a rage believing that Donald Trump won the 2020 election. No matter how many facts are presented they will not accept them.

Is there an issue of becoming part of a cult? Fealty to one man and to hell with those who do not agree. Those who do not bite the poison apple of hatred are called traitors if they do not believe in his Orangeness.

Really? Are they traitors because they are not loyal to a great nation and its principles and instead are loyal to one man?

They abuse the American flag, the symbol of this nation’s greatness. While they carry banners saying “Don’t Tread On Me” they are the ones treading and trampling America’s symbol, freedoms, and liberties. They wrap themselves in American flags or Trump banners and call themselves patriots when in fact what they are the traitors.

They prove that in their unwavering, vicious assaults on what democracy stands for.

Violent? You bet. Many of them say are willing to kill or in some way do great harm to others who do not buy into their ugliness and hatred. The FBI is continuously exposing those who make pipe bombs and have semi-automatic weapons and hundreds upon hundreds of rounds of ammunition. Their intent is certainly not to go rabbit hunting.

All of this is happening while hundreds of thousands of Americans continue to suffer horrible deaths. And those in the Trump cult appear not to give a damn.

A cult? There are many news sources that are referring to Trump supporters as being cult-like. Some of his supporters have said, and quite vociferously, that they will die for Trump if they have to.

Hmm, a cult. Many readers are probably too young to remember Jim Jones and Jonestown. He was the head of the Peoples Temple. He established Jonestown, a cultist community in far off Guyana. It was a hideaway.

But American authorities began investigating Jones as relatives and friends began complaining and voicing deep concerns about family members, friends, and other loved ones being involved in the cult.

Jones feared exposure and the truth about his cult when American Congressman Leo Ryan flew to Guyana to investigate Jones and his world.

He feared exposure so much that he committed an atrocity and his followers were complicit. So much so that they committed suicide. Jones had 900 cult members gather. They were given Kool-Aid to drink. Cultists knew it was poisoned but they drank it anyway. Those with children gave it to them.

Photos of the aftermath showed heaps of dead, including very small children.

As for Jones, using a pistol he shot himself in the head. He blew his brains out.

History shows us that invoking a Higher Power to commit atrocities is hardly anything new. Some undoubtedly were not aware that they were part of a cult. They just believe in whatever they have been brainwashed by.

In today’s world, what is so disturbing is what the future may hold involving cults.

Even some of what we hold most sacred is being corrupted by a cult. Take for example those carrying “Don’t Tread On Me” banners, Confederate flags, and so forth.

What is most disturbing is that some Trump cultists also carry banners claiming God and Jesus Christ are on their side. That is a strong, insane contradiction among those who use the names of those deities and at the same time spew the venom of hate, violence, and treason.

We are so fortunate to have religious freedom in America. To see that freedom corrupted makes one’s stomach turn. It also makes cause for fear knowing that so many avowed Christians pervert the principles of that theology and are willing to kill or do harm to others.

What comes to mind are some words from the song “One Tin Soldier”:

Do it in the name of heaven, you can justify it in the end.”

So, any wonder of why I just don’t get it.