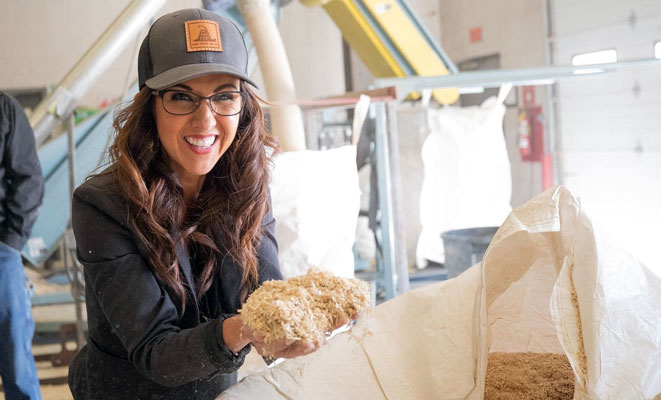 In this season of compassion, please send thoughts and prayers to Lauren Boebert.

The Republican congresswoman from Colorado says she’s the victim of senseless violence.

She’s not the type of victim killed or maimed at Club Q in Colorado Springs, a place for LBGTQ individuals and friends. Her victimhood is nothing like those harmed and killed in countless scenes of indiscriminate horror because of where they were, or who or what they were.

They died because, though certain politicians talk a big “pro-life” game, nothing is so inviolate as the right of a maniac to have military manpower to lay victims to waste.

Nonetheless, pursuant to such horrors, Boebert told a right-wing radio host she felt set upon.

“I’ve been accused of every mass shooting there has been since the left learned my name,” she said. “It has to end.”

The “it” of reference wasn’t all of the dying at the ends of blazing military arms that shouldn’t be in civilian hands. It was the “blame game” aimed at her. Poor woman.

Maybe she was referring to Rep. Alexandria Ocasio-Cortez’s response when Boebert issued the standard cardboard response to the Club Q horrors – that the victims and their kin were “in my prayers.”

“You have played a major role in anti-LGBT+ rhetoric and anti-trans lies,” tweeted AOC.  “You don’t get to ‘thoughts and prayers’ your way out of this.”

AOC observed that in addition to non-stop exploitive slurs of LGBTQ individuals, Boebert’s very being is one of fanatical devotion to the god of firearms, particularly the types of assault weapons used in Colorado Springs and so many mass murders.

Nonetheless, thoughts and prayers go out to Rep. Boebert. She’s had a traumatic few days. She almost lost her political pulpit when Democrat Adam Frisch came within an infant’s eyelash of defeating her on Nov. 8.

Boebert was expected to cruise to re-election. Where did all of her support go?

Maybe she lost some when she butchered Bible phrases trying to impress audiences with her phony piety.

Maybe it was cheering on vicious Capitol insurrectionists.

Maybe it was her suck-my-thumb protest when she couldn’t carry a gun on the House floor.

And maybe, just maybe, it was former supporters acknowledging that gay and transgender people are – people.

The Denver Post flayed Boebert after the shooting at the Colorado Springs LGBTQ gathering place, saying to Boebert, “We’re looking at you,” in contemplating the causes of events like the Club Q massacre:

“The gunman is responsible for firing those bullets, but we provided the tools, and there are those among us who fed a narrative of hate and intolerance, failing to either understand or care where those words may lead.”

To that charge, Boebert, and too many Republican politicians and evangelicals, have no plea but “guilty.”

One of the favorite slurs of the right is that programs promoting the understanding of LGBTQ individuals are “grooming” children to become victims.

Yes, a lot of the people who dismissed the real dynamics of a killer virus want you to believe gayness can be transmitted through the air.

Those same people refuse to acknowledge the reality – and realities – of LGBTQ orientation and are playing the same tune as forebears who believed race-mixing defied God’s commands.

They make a transgender athlete in the pool a “Jaws”-like menace against all swimmers.

The fact is that demagogues like Boebert are not interested at all in governing. They are interested in riling up “the base” with debased appeals. “Angertainment” is what her opponent called her schtick.

Again, thoughts and prayers to the congresswoman. The day after conceding to Boebert based on a micro-thin 558-vote difference, Adam Frisch filed the papers for 2024.

I bet he’ll find those votes and more.