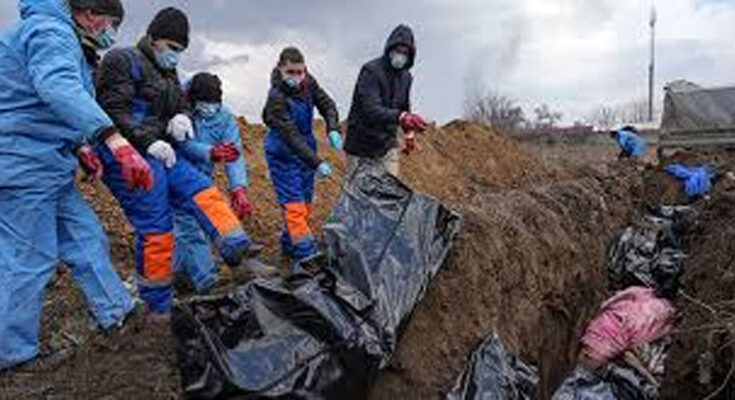 Contributed Photo: To help prevent the spread of disease, body bags of civilians killed by war are dumped into unmarked trenches.  Russia has a history of butchering as many people as it can, including babies, children, women, and the elderly are fair game in its quest to conquer an opponent.

Not being a contemporary scholar of the opinions of French writer and philosopher Francois Marie Arouet de Voltaire (1694-1778), nevertheless, his words ring true today as they did in the 1700s.

His statement concerning absurdities and atrocities has proven prophetic for the past several hundred years.  Indeed, our own American Revolution, Constitution, and codes of law are reflective of many of his ideas concerning the inalienable rights of the ordinary individual and the historic tendency of ruthless tyrants to subvert and substitute these basic concepts with totalitarian barbarism.

The above quote is simply a predecessor to a modern version — “If you believe everything the government tells you, then you will do anything they say.”

We’re presently witnessing Russian President, Vladimir Putin, exercising his assumed authority by invading and killing soldiers and citizens in neighboring Ukraine.  Not because he has the right to, but because he wanted to.

Not hiding his ambitions, Vlad has been chipping away at various areas of Ukraine for several years.  The animosity between the two countries has existed for decades, or longer.

The collapse of the Soviet Union thirty years ago served as an incubator for many of Putin’s perverted ideas.  The old socialist Soviet regime could no longer economically and militarily sustain its deteriorating empire.

Soviet commerce, like Russia today, was nearly nonexistent.  They didn’t produce or export much of anything, except petroleum-based fuels and some agricultural commodities.  Reportedly, their entire annual gross domestic product (GNP) is about the size of Texas, in spite of the fact they are many times larger than Texas.

Try finding a “Made in Russia” T-shirt, cell phone, or battery-powered hand tool in Walmart or Home Depot.  You can look until closing time and still go home empty-handed.

Oh, their military is to be feared and respected we’re constantly reminded.  Not sure about that, either.  The same mentality that can’t produce enough food and merchandise to adequately feed and provide for its citizens is probably not overly proficient at maintaining a well-trained and equipped modern army and navy.

We’re seeing this scenario play out in Ukraine.   Much smaller Ukrainian military and civilian forces are giving Russia all it can handle, and more.  To such an extent, Vlad may decide Ukraine can’t be defeated and attempt to carve out and destroy as much of it as possible before negotiating a truce.

In his mind, a piece of the pie is better than nothing.  Especially, after thousands of Russian military deaths and billions of rubles (money) have been spent.

Yeah, but what about their nuclear and chemical arsenals?  Supposedly, they have an abundance of missiles and warheads.

Probably do, but how many of them actually function and could hit an intended target?  Like the disastrous Chernobyl power plant meltdown years ago, Russian nuclear technical skills don’t appear fully developed.

Just guessing, I imagine our satellite and stealthy aircraft technology – and other super-secret instruments – provide constant updates on Russia’s offensive weaponry and where they’re located.

As a demonstration of its supposed supremacy, Moscow’s Red Square military spectacles, parading goose-stepping soldiers, shiny tanks, and missile launchers are routinely presented.   A good show to remind unarmed locals what to expect should they suddenly develop visions of seeking their own less regimented society.

What they don’t see, and their leaders seldom discuss, is the fact that Russia is surrounded by an equal amount of nuclear armament.  And, I imagine, more efficient.

Remember when Lil’ Kim of North Korea bragged he had a red button to use to launch missile strikes?

President Trump calmly reminded him he had a red button, too.  Only his was much bigger – and it works.

Of course, now that Joe Biden is perceived as being a weak and indecisive president, Lil’ Kim and Vlad are once again firing off missiles, attacking countries, and giving public demonstrations of their nation’s military prowess.

However, with the right U.S. leadership, things can quickly turn around.  It’s one thing to indiscriminately bomb and destroy civilian targets, quite another when the aggressor’s country could be on the receiving end of a much more lethal and accurate retaliation.

Vlad, Kim, and any other tough guy might want to keep that suggestion in mind.  Sometimes a dictator’s illusions of grandeur cloud reality.

Unfortunately, the reality is seldom an issue in the twisted brains of megalomaniacs.  They often end up being killed or killing themselves before the hangman arrives.