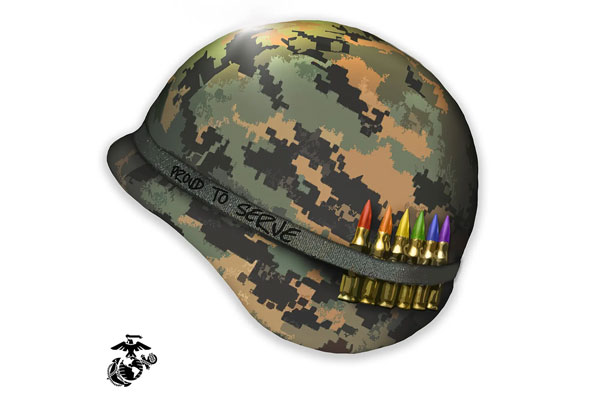 Image Courtesy U.S. Marine Corps: The Marine Corps’ announcement of its LGBTQ policies was accompanied by a picture of a combat helmet similar to the one illustrated on the 1987 Viet Nam war movie poster “Full Metal Jacket.” Only “Born To Kill” inscribed on the side of the movie helmet was replaced with a “Proud To Serve” logo and multi-colored bullets.

The Marine Corps has come a long way since my days in their service.  Not sure it’s all been for the better.

When I came across this story, my immediate reaction was it must have been an April Fools scribblings of some leftist journalist, intent upon disrespecting the Corps while appealing to his equally progressive editor.

Never imagined, for even a second, the article had some basis in fact.

Apparently, the Marine Corps boasted its liberal leanings when it tweeted “Throughout June, the USMC takes #Pride in recognizing and honoring the contributions of our LGBTQ service members.  We remain committed to fostering an environment free from discrimination, and defend the values of treating all equally, with dignity and respect.”

I wonder if “treating all equally, with dignity and respect” includes the enemy.

Okay, I’m a little confused.  If “treating all equally” is the goal, then why the necessity of rainbow-colored bullets?  To my understanding, rainbow-hued flags and other accessories, are the recognized symbols of the Lesbian, Gay, Bisexual, Transgendered, and Queer community.

Additionally, what are the contributions of LGBTQ service members we are supposed to honor?  Do they do their jobs better than anyone else?  Are they exceptional rifle marksmen?  Pilot jets and helicopters with extraordinary skills?  Possess a more intensive fighting spirit?  Make better Drill Instructors?  Cook a tastier dish of s#%t on a shingle?  File reports in a remarkably efficient manner?

What is it that makes them so special?

Also omitted, there is no mention of the “S” word – “Straight” – in their string of letters.  Why not?  If everyone is equal and due the same amount of dignity and respect, then how is ignoring the largest heterosexually oriented segment of the Corps not contradicting their own pledge?

Equally puzzling, why does the Marine Corps observe an entire month of gay-related activities, but only a single day for its own birthday?

Doesn’t sound equal to me, or show much admiration for its 247 years of service and traditions.

Then, there’s the question of exactly how many LGBTQ Marine enlisted and officers are there.  A squad, platoon, company, battalion, regiment, division?  What’s the number?  Is it so many they must be specifically recognized with a month-long celebration, overseen by LGBTQ-sympathetic generals?

As it turns out, not as many as we’re led to believe.

In 2015, the RAND Corporation (a contraction of “Research and Development”) surveyed about 16,000 military personnel and discovered only about 5.8% admitted to being bisexual, gay, or lesbian.  Undoubtedly, a few refused to answer such a personal question.

Nevertheless, not a substantial number of troops and sailors – but vocal.

LGBTQ presence in the military has been increasing since President Bill Clinton (D) signed into law the “Don’t ask, don’t tell” (DADT) policy in 1993.  Prior to this, gays and lesbians were not officially permitted to join.

in 2010, President Barack Obama (D) approved the DADT Repeal Act, lifting all restrictions on bisexuals, gays, and lesbians in the military.

The situation progressed to include any sexual preference.  Hence, the LQBTQ – and whatever else may be included – designation.

What next, a rainbow flag unfurled from the staff of the Iwo Jima Memorial as a Gay Pride Parade passes in review?  Maybe an order to provide comfort animals and crying rooms for overly stressed LGBTQ Marine recruits whose cell phones and video games have been temporarily suspended during training?

Surely, Drag Queen shows will become an acceptable form of entertainment in Noncommissioned Officers (NCO) and Officers Clubs for the few and the proud?

Perhaps a yearly LGBTQ Ball as an alternative to the annual Marine Corps Birthday Ball on Nov. 10.

Fortunately, there are still a few Marines, and former Marines, who aren’t enamored with the “New Corps” woke philosophy of things.

Jason Buttrill, a reported retired Marine and Defense Department analyst, tweeted “F—kin out of here with this.  We don’t take political sides, and we don’t engage in social commentary.  We kill the enemy. . .period.”

I guess, this time, Jason was pissed enough to depart from his creed and posted a brief “social commentary.”

Apparently, Jason wasn’t alone.  Thousands of tweets from Marines and others quickly appeared on social media.  Most of them expressed disappointment with the Marine Corps’ recently implemented LGBTQ directives.

This, in addition to several thousand Marines being notified they will be terminated because of their refusal to take the COVID-19 shots, even though President Joe announced on CBS’ “60 Minutes,” Sept. 18, 2022, “The pandemic is over.”

If the “pandemic is over,” why the need for vaccinations or multiple boosters, which have been proven to be only partially effective and do not prevent individual infection or transmission?   As we were previously assured by esteemed government health experts and officials, including Joe.

I can understand the frustration.  However, for better or worse, it has to be realized the Department of Defense and the Secretary of Navy (the Marine Corps is under the jurisdiction of the Navy), enforce laws and regulations passed by Congress and the Commander-in-Chief, aka the President.

While embracing LGBTQ mandates may not appeal to a majority of active service members, it is a fact of life they must be obeyed until amended or repealed by a Congress and President whose thinking is more in line with the necessity of maintaining a disciplined fighting force, concerned with threats from a potential enemy, than accommodating the personal feelings of a few snowflake sailors, soldiers, flyers and Marines.

What the Corps doesn’t need is a staff of flaccid politicians in uniform; commanding officers, generals, and admirals whose primary ambition is to agree with their buddies in Congress to gain rank and influence in hopes of achieving a fatter retirement check or a lucrative corporate gig.

Got a complaint?  Contact your Congressional representatives.  Maybe drop a line to President Joe.  I’m sure he’d be interested in your opinions.

On the flip side, I sincerely suspect the Chinese, Russian, North Korean, and Iranian leaders are in complete support of the U.S. military’s LGBTQ doctrines.

Even if they don’t understand the meaning of the LGBTQ abbreviation, they’re smart enough to know a military force that includes transgendered and queer individuals has to be to an antagonist’s advantage.