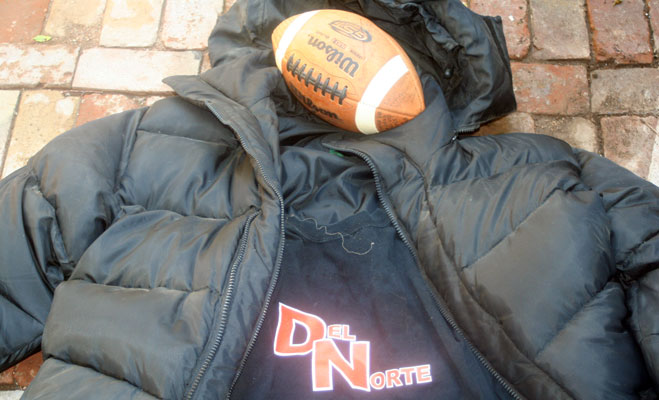 Walt Mares Photo/Gila Herald: A heavy down-filled coat such as this was the ideal wear for the 32 below zero weather at a Del Norte High School football game in 1979 in Colorado. The field was still iced over after snow was plowed two feet high on the sidelines. However, the cold was not the only thing that made that miserable night memorable. It involved a totally unexpected ‘gas attack.’

A recent Friday night was quite cool and pleasant while standing on the sidelines and watching the hometown, and eventual victor, Morenci Wildcats football team play St. John’s.

Ah, yes, the weather was perfect. I was wearing only trunks (shorts) and a T-shirt. Then for some reason, a shiver ran through my body, as it might while being out in the cold. I understand that can happen to most people. It only lasts a few seconds. Although it may unexplainable, it happens.

I have heard it said that a ghost has passed by or through a person when one shivers like that. But who knows?

It was not ghosts that came to mind as I stood and briefly shivered on the Wildcat sidelines. Instead, I had a thought about a football game that happened long ago. I believe it was in 1979. It involved the Del Norte Tigers and a home playoff game.

I was a sportswriter for the Valley Courier newspaper. I had experienced some unpleasant weather while covering Valley football teams, but nothing like I would face in Del Norte.

The town is in the high-altitude San Luis Valley of south-central Colorado. Del Norte is in the northwestern part of the Valley and at the foot of the San Juan Mountains. The mouth of the Rio Grande is in the San Juans near the Continental Divide and not far from Del Norte, whose elevation is about 8,500 feet.

It was colder than a publisher’s heart that night of the Del Norte football game. It was either in late October or early November. Just driving the 30 miles from Alamosa to Del Norte was touchy. The surface of the highway was beginning to ice up.

The outdoor temperature was about 32 below zero. I knew it was going to be a very interesting night when I arrived at the Tiger stadium. A tractor with a bucket to scoop snow off the field was parked near one of the end zones. Despite the snow having been cleared there remained a layer of ice on the field.

Snow had been plowed off to the sidelines where hardcore fans stood close to the field on two-foot-high snowdrifts. I took some comfort in the fact the wind was not blowing – yet.

Fans were wrapped up like the proverbial Eskimo. They wore not only heavy coats and gloves but most also had mufflers on their faces to ward off the bitter cold. Being a San Luis Valley native, I was dressed for the weather. I had a big goose-down coat and heavy-duty gloves.

However, when it came time to shooting photographs I had to bring my camera out from under my coat and as quickly as possible took a shot and only one shot. The camera’s lens would almost immediately frost over. I did not take many photos that but I did have enough decent ones that were usable for that Monday’s sports page.

Wouldn’t you know it? The action of sorts occurred on the sidelines as well as on the field. There was more than the cold to deal with. I stood on a snowbank and was tucked in tight with about 10 other people. Suddenly there was an awful, awful smell. It was enough to gag a maggot, as the saying goes.

Fortunately, a breeze had started up and the odor soon dissipated. But then about a minute later, that awful smell was back. Although they wore mufflers people flinched as the odor struck them. The third time it happened people began to move a few feet away from each other. When it happened again they moved even further away.

I stepped down from the snowbank and stood perhaps only a foot from the sideline. It was that or start gagging. As I looked behind me there was a big fellow who stood there by himself. Everybody else had moved away from him. I saw him lower his muffler from his mouth and he stood there smiling. Judging by his smile I could not help but think the guy was indeed the culprit. Was venting his gas some kind of sick thrill for him?

After the game, I spoke with Del Norte Athletic Director Marlin Janas about the incident. He, too, had been standing fairly close to the gas man. Marlin knew who the man was. After all, Del Norte is not a very big town. He said that if not for it having been the last home game of the season the gasser would be banned from any future nighttime home games.

We agreed that of all the night games we had been to, neither of us had experienced such thing as that night’s gas attack.

Marlin laughed and said, “For one thing, I know there aren’t any gas masks around to deal with something like that. I wonder if it was anything like what happened in the trenches of World War I. It sure does make you appreciate what those guys went through over there.”

There was a lingering odor in my nose as I drove back to Alamosa. The highway was iced over and despite having snow tires on the Ford Pinto, I crawled home at about 35 miles per hour. I had a window cracked open a bit to breathe some fresh air. It was quite uncomfortable as no doubt the outdoor temp was by then much colder than 32 below. The air coming through the open window made it even colder.

That night became a mixed blessing. During the following football season in the San Luis Valley games were played only in the afternoon. That remains the norm to this day. Nor since the Del Norte game have I ever had the need to think about wearing a gas mask at a football game.