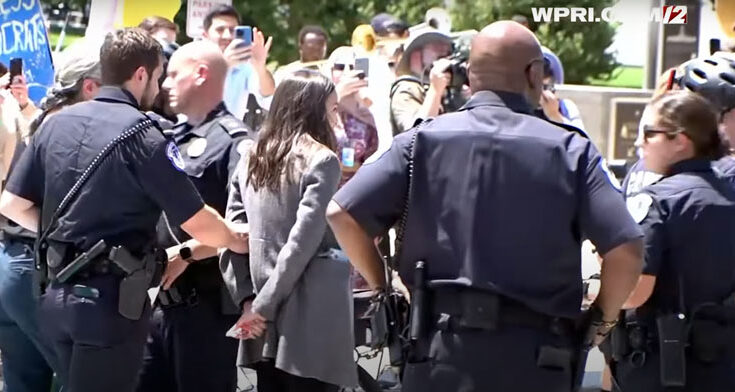 Rep. Alexandria Ocasio-Cortez (D-N.Y. 14) was not handcuffed as Capitol Police officers led her away from a street protest near the U.S. Supreme Court. (Image via WPRI-TV/YouTube screengrab.

U.S. Representative, Alexandra Ocasio-Cortez (NY-D), and a few of her Congressional associates concocted a creative way to generate public interest in their latest escapades – imaginary handcuffs.

Seventeen Democrat Party members of Congress and 18 others were arrested by U.S. Capitol Police outside the Supreme Court on Tuesday, July 19, 2022, and charged with “Crowding, Obstructing and Incommoding” (inconvenience).

Police gave the protesters three warnings to stop interfering with traffic before they were “arrested” and escorted to an off-street area.

Surprisingly, Speaker Nancy Pelosi (CA-D) wasn’t in the mix.  Conceivably, she was back in San Francisco attending some drag queen convention or assisting her husband in picking a highly profitable stock market selection.

Neither was Rep. Maxine Waters (CA-D) – perhaps too obnoxious to even waste a cop’s time.

The arrests were more symbolic than real.  I believe a $50 fine and a citation was the penalty.

But, the publicity was priceless.  After all, elections are approaching and free press camera time helps get faces noticed.

Their demonstration was a continuing protest against the recent overturning of Roe v Wade, in which the Court returned abortion issues to the individual states.

These four women are also members of the Democratic Socialists of America, advocating Medicare for All, tuition-free public college, a federal jobs guarantee, a Green New Deal, and abolishing U.S. Immigration and Customs Enforcement (ICE).

In a show of solidarity, Ocasio-Cortez raised a fist to the crowd and then quickly resumed the pretended behind-the-back handcuff.  Not Academy award-winning acting, but somewhat entertaining.

A former bartender and waitress, she was elected to New York’s 14th Congressional District in 2018 and reelected in 2020.  The district includes parts of the Bronx, Queens, and Rikers Island in New York City.

Readers may have read or seen Ocasio-Cortez complain about the high cost of living in the Nation’s Capitol.  Maybe so, but coming from a bartender’s salary to a Congressional representative’s $174,000 annual compensation – $14,500 per month plus perks – ain’t bad.

If that’s not enough, she could always work a second job serving Samuel Adams on tap at a local watering hole.  Or, get together with her buddies and vote for themselves another pay raise.

With inflation and fuel costs out of control, that’s a distinct possibility.