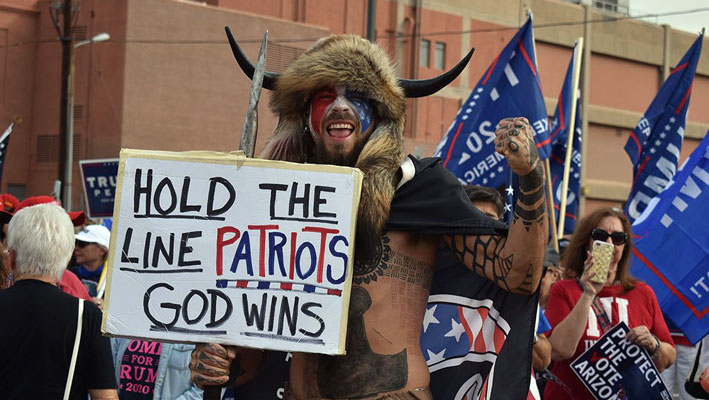 File Photo By Hope O’Brien/Cronkite News: Jacob Chansley at a November protest outside the Maricopa County elections center in the outfit that later made him the face of the Jan. 6 attack on the U.S. Capitol. Chansley pleaded guilty to one count in connection with the attack, was sentenced to 41 months in prison, and was sent to FCI-Safford.

Not much attention is being devoted to the fate of several Jan. 6, 2021, Capitol Hill protesters who are still in jail awaiting their “day in court” — nearly two years later.

President Joe Biden’s Department of Justice, FBI, Congress, and the national media are nearly silent on the subject.

These unfortunate individuals – many of who were peacefully exercising their right to free speech and protest the government – are being incarcerated on charges that don’t appear to fit the crime.

Except, evidently, unless people being detained are of a different political persuasion.  Or, they participate in a public demonstration that is not condoned by the current ruling elite.

I came across an article by attorney Larry Klayman, who was one of the lawyers in President Bill Clinton’s impeachment fiasco, as well as other cases involving President Obama’s National Security Agency spying on millions of Americans.

Being a Marine veteran myself, tweaked an interest in Rehl’s story.  Specifically, the situation he is in following his involvement in the Jan. 6, 2021, Capitol Hill protests.

On March 17, 2021, the FBI arrested Rehl and placed him in jail.  He’s been incarcerated and held without bail ever since.

Seditious conspiracy is a legal term for stirring up rebellion against the government.

The only problem, according to his lawyer, is that Rehl didn’t attack the Capitol Police, wasn’t armed and didn’t break anything or hurt anyone.

A stark contrast to the police officer who shot through a broken window and killed an unarmed woman in another room.

Rehl, however, did publicly voice his opinions.

By the way, his VA disability payments, supposedly, have been suspended because of his arrest and indictment.

He hasn’t been convicted – just charged.

So, why is he sitting in jail, denied bail, and accused of a felony?  What could a disabled, former Marine do to enrage the wrath of the United States Government?

He is a member of the Proud Boys.  Actually, associated with the Philadelphia, Pennsylvania chapter.  Other individuals in the organization have also been arrested and confined.

I’m not accusing or defending, the actions of the Proud Boys, or condoning their alleged Capitol Hill misdeeds on Jan. 6, 2021.  I don’t know enough about their particular circumstances to render an informed decision.

Particularly, since the government continues to procrastinate in bringing many of these defendants to trial, limiting the availability of public information.

My concern is why it is taking so long for the Department of Justice to act on these cases.  Especially, in an era when it’s routine to release accused suspects – many violent – in less than 24 hours, with little or no bail.

Attorney Klayman, put forth a letter from Zach Rehl to his wife, expressing concerns he has with the DOJ’s behavior toward Jan. 6 protesters, “They are jailing innocent people on bogus and trumped-up charges because those people simply supported the sitting president Donald Trump at the time; which is absolutely insane.  If you think it can’t happen to you, look at me, because if it can happen to me, trust me, it can happen to you.”

Rehl has a point.  The FBI has arrested several of Trump’s associates, and even conducted an armed raid on his residence in Florida, fishing for evidence to use against him in some anticipated courtroom skirmish.

Apparently, Biden’s FBI has been given the go-ahead to track and arrest anyone deemed an ardent Trump fan, or who’s perceived a threat to “democracy.”

Yet, the same DOJ turns its head, totally ignoring the migrant invasion on our southern border – an ongoing catastrophe immensely greater in size and importance than the Capitol Hill uproar.

Basically, Jan. 6 protesters remain in jail while millions of unlawful border crossers enter our country whenever they please.  In spite of Biden insisting “The border is secure.”

What a load of B.S. – bovine stool – and everyone knows it.  Except, the ardent ideologues intent upon wrecking our society.

In just two years, Joe has allowed more people to illegally walk into our country than the populations of several states.  In essence, the Biden Administration has lost operational control of our own border.

These addlebrained acts of recklessness constitute an infinitely larger threat to safety, security, and democracy than a civil disturbance in Washington, D.C., nearly two years ago.

Obviously, Joe’s crew has a heaping helping of both, as we are presently witnessing.

On the other hand, if these impetuous actions are not being administered by an overabundance of stupid and incompetent officials, then they must be supervised by intentional design.

If so, that’s a whole different ballgame!